Man has the amazing ability to create pictures in the mind and then bring into reality what was imagined.  We see man’s creativity in manufacturing, art, literature, music, humor and the common activities of everyday life.  Every parent has probably experienced what happens when he/she purchases a nice gift for a child only to find the gift set aside and the child playing with the box the gift came in.

Understanding man’s creative ability is a topic that has captured the thinking of sociologists, psychologists, educators and theologians for centuries.  The creative nature of man baffles those who try to convince us that man has evolved form non-creative beings over millions of years.

The reality is that our imagination and creativity comes from our Creator.  Since man was created in the image of a creative God, man is the only being that can imagine and then bring into existence what he imagined.  Our creativity is a reflection of the very creative nature of God.  Of course, God is the ultimate Creator and the only One who can create things out of nothing.  Man can merely take what God has created and use those things to create something new.

God expects man to use his creativity to fulfill what is referred to as the Cultural Mandate recorded in Genesis.

God intended for man to use his creativity to rule over His creation as a steward.  However, with the Fall, man’s creativity would be used for both good and evil.  The creative mind of man developed such things as airplanes, computers and the cell phone.  However, man’s creative abilities were used to fly airplanes into the World Trade Center towers killing thousands; to use computers to transmit pornography into the minds of children, youth and adults at the mere click of a button; to use cell phones to captivate the waking hours  of life and destroy important relationships.

One of the most important uses of our creativity is found in man’s ability to create culture.  Darrow Miller in his book, LifeWork, states that God made humankind to be culture makers and it matters hugely what kind of culture we create.  Miller argues that God created man in His image desiring man to create a kingdom culture — culture that reflects the true nature and character of God.  Again, we must keep in mind that man will not automatically create this type of culture.  In fact, because of sin, man is bent toward creating culture that goes against the very nature of God.

We must remember that behind every educational effort there is some “god” that is feared, pursued and served.  This is a very 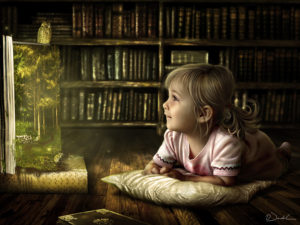 important fact to keep in mind because the education we give our children will play a big role in determining what type of culture our children and youth will create.  Miller explains it this way.

Culture is a product of a people’s cult, or their civic religion.  It’s a reflection of the god they worship…culture is the temporal manifestation of a people’s faith…The cult [faith] leads to culture.  This, in turn, determines the kinds of societies and nations we will build.

In light of man’s ability to create, it is crucial that we provide our children and youth with a biblical worldview education.  This is our only hope to ensure that they will grow up to use their amazing ability to create for good and not for evil.  When we do this, our children and youth will be able to create a kingdom culture — a culture that will be created by image bearers of God reflecting His nature and character to a lost world.  What are we using our creative abilities to do when it comes to educating future generations?