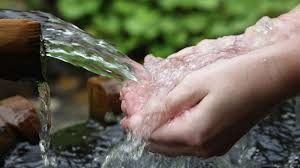 When the city officials of Flint, Michigan made the fatal decision to change the source of their water, there were concerns as to the wisdom of this decision.  Some residents were leery about this move, wondering about the quality of the water.  For the next several months a major cover-up took place by city and state officials. To ease the residents concerns, city officials issued several statements.

Even with a proven track record of providing perfectly good water for Flint, there still remains lingering uncertainty of the quality of the water.  In an effort to dispel myths and promote the truth about the Flint River and its viability as a residential water resource, there have been numerous studies and tests conducted on its water by several independent organizations…Michael Prysby of the Michigan DEQ Office of Drinking Water verified that ‘the quality of the water being put out meets all of our drinking water standards and Flint water is safe to drink.’

It’s regular, good, pure drinking water, and it’s right in our backyard…this is the first step forward in controlling the future of our community’s most precious resource.

Even with the city officials’ assurances that the water was safe, it did not take long before the citizens of Flint made complaints.  These complaints centered on the smell, color and hardness of the water.  In August of 2014 fecal coliform bacteria was detected in Flint’s water that led to advisories for residents to boil their water.

Again, in September of 2014 another positive test for coliform bacteria caused another advisory to boil water before using.  The city’s steps to correct this serious problem were to flush the pipes.  Four days later residents were told that the water was safe to drink from the tap.

What took place in early 2015 baffles one’s mind. Here are a couple of critical decisions that were made.

With a major health and safety crisis looming, officials from the city and state continue to pump contaminated water to the residents and businesses of Flint.  Consider the following events that took place.

Even with all of the evidence pointing to the contaminated water that was pouring into the homes and businesses of the city, city and state officials continued with the mantra that the water is perfectly safe.

When the decision was made to change the source from where American children and youth would receive their education, it was considered a “safe” move.  After all the home and church would still teach their children about faith and values.  And the school would be teaching children the facts and knowledge that would be needed for them to be successful citizens.

It wasn’t long before some individuals became concerned that the “waters” from this new educational source were contaminated. One such individual was Dr. Robert Lewis Dabney, Professor of Moral Philosophy at the University of Texas. In 1897, Dabney published a book on secularism in which he predicted,

If the State in America becomes the educator, education must be secularized totally…If the State assumes responsibility for education, there is therefore a great risk that the education of youth will be perverted to serve an ideological faction.  This will occur by the hateful means of filling their minds with error and passion in place of truth and right.

Another voice that sounded forth a warning about what would happen when children would drink contaminated water from a government run, secular education system was Daniel Webster.  He wrote,

In what age, by what sect, where, when, by whom, has religious truth been excluded from education?  Nowhere, Never!  Everywhere, and at all times, it has been regarded as essential.  It is of essence, the vitality of useful instruction.

Dabney also predicted that turning to the State as the children’s educational source would result in certain things being removed from a child’s education.

But nearly all public men and preachers declare that the public schools are the glory of America.  They are a finality, and in no event to be surrendered.  We have seen that their complete secularization is logically inevitable.  Christians must prepare themselves then, for the following results:  All prayers, catechisms, and Bibles will ultimately be driven out of the schools.

Slowly but surely signs of contamination from the new source of knowledge and wisdom started to be seen.  Some Christian leaders boldly addressed the poisoning of the children and youth.  Once such voice was that of Charles Clayton Morrison.  He was the editor of the The Christian Century.  In a 1940 address to 10,000 public school teachers in Kansas City, Morrison stated,

The public school is confessedly and deliberately secular.  I am bound, therefore, to lay on the doorstep of our educational system the prime responsibility for the decline of religion and the steady advance of secularism, another name for atheism. In American society…Protestant children in public schools are under an influence which the churches cannot counteract.  The pubic school presents the church with a generation of youth whose minds have been cast in a secular world.

Later in 1951, Frank Gaebelein authored a report for the National Association of Evangelicals for United Action titled, Christian Education in a Democracy.  In this report Gaebelein explained what Christian parents and church leaders were doing in allowing their children to “drink” from this new secular source of knowledge and wisdom.

The fact is that, as both home and church have lost grip on American youth, the people of this country have looked to education to fill the gap.  With a confidence that would be touching if not based on evasion of responsibility, they have turned their youth – body, mind, and soul – over to the most extensive and highly organized system of education this world has ever known.

Unfortunately, the warnings that several people voiced about the danger of changing the source of our children’s education went unheeded. Educators, politicians and, even, church leaders lauded the benefits of this new source of education.  Not only did pastors and church leaders vocally support this new educational source but they also showed their church members that the waters of secular education were perfectly safe by enrolling their own children in these schools.  Every child would receive a “free” education and this education would be right in a family’s backyard.

The cover-up of the danger of drinking contaminated water was an effort to keep the citizens of Flint comfortable about drinking water from the Flint River.  The cover-up of the danger of allowing children and youth to drink the contaminated waters of secular education was both intentional and comprehensive in its scope.  The result was that the majority of Christian parents willingly turned the formal education of their children over to the state believing that drinking the new water was completely harmless.

Next week I want to look at what steps people took when there was no doubt that the water was poisonous and dangerous to the health of children and youth.  Be sure to leave your comments below.