I had the privilege of speaking at the BJ Press Worldview Conference at the Creation Museum and Ark Encounter last week.  I came away from the conference encouraged, challenged and convicted.  One of the presentations that brought the most conviction to my spirit was the one given by George Barna.  In his presentation he showed where the country was in relation to a biblical worldview.  Barna noted that:

Barna’s premise was that every person, individually, and groups of individuals, corporately, only do what he/she/they believe!  This means that today’s children have a much higher probability of developing a secular worldview than a biblical one because their teachers can only give them what they, themselves, possess. 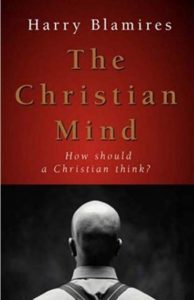 Upon returning home, I went to my bookshelves and pulled two books out that address this serious condition that we are facing in today’s Church.  The first book was The Christian Mind: How Should a Chrisitan Think?, by Harry Blamires.  As I opened the pages of this book, that I have read on a couple of occasions, I was taken captive by the first sentence in the book.  It simply states, There is no longer a Christian Mind.  Wow!  Is Blarmires stating that Christians don’t have minds?  Absolutely not.  What he is proposing is that Christians no longer possess the ability to address all of life from a biblical perspective.  In fact, Blamires states unashamedly that the Christian mind has succumbed to the secular drift with a degree of weakness unmatched in Christian History.  He postures that, in Christianity, there is

However, when it comes to all of life, there is not any Chrisitan thinking commonly taking place.  In Blamires’ mind, most Christians accept the morality, worship and spiritual culture of religion but reject the “religious” view of life.  Christians have succumbed to the secularization of the mind.  This is evidenced by thinking that ignores the supernatural as having any part to play in everyday life.  There are those who will share their grave concerns as to the direction society is going.  In many cases, these concerns are in line with the concerns we, as Christians, have as well.  However, they can only address these issues from a humanistic view and, therefore, cannot begin to address the cause and/or the cure for the direction we are all heading in.  The alarming thing about what Blamires so accurately described is that he wrote this book in 1963.

The second book that I pulled from my book shelves was one written by Os Guinness, written 30 years after Blamires’ book was published.  I must admit that I first bought this book only because of its title — Fit Bodies, Fat Minds.  However, the subtitle 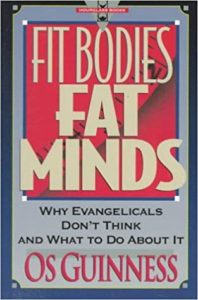 of the book is what really caught my full attention the other day.  It reads, Why Evangelicals Don’t Think and What To Do About It.  Again, I found myself asking the question, Is it true that Christians don’t think?  Once again, I had to admit that all Christians think.  That is a reality of life — human beings all think!  So what was Guinness trying to say.  His main premise is that the average Christian no longer has the ability to think Christianly.  The result, according to Guinness is,

Failing to think Christianly, evangelicals have been forced into the role of cultural imitators and adapters rather than originators.  In biblical terms, it is to be worldly and conformist, not decisively Christian.

Guinness goes on to point out how evangelicals take their “religious” life seriously but Christianity does not have much, if any, influence on our everyday, non-religious life.  He makes this point when he writes,

We are a people with a true, sometimes a deep, experience of God.  But we are no longer people of truth.

Blamires and Guinness talk a great deal about “Christian” things.  I struggle with using Christian as an adjective to describe anything related to life today because the term has become so subjective.  What does Christian mean?  What does it mean to have a Christian mind?  What does Guinness mean when he says we need to think Christianly?  I am thankful that Guinness goes on to define what thinking Christianly really means.

…thinking Christianly is thinking by Christians about anything and everything in a consistently Christian way — in a manner that is shaped, directed, and restrained by the truth of God’s Word and God’s Spirit.  (emphasis mine)

This is what needs to take place in our homes, churches and schools if we are going to be able to instill a biblical worldview into the hearts and minds of children and youth.  Barna summarized his findings as he closed his presentation last week by stating,

Barna then left the attendees with this challenge.

So…who is called to, and capable of, leading movement to lead the development of a biblical worldview in the minds and hearts of America’s children?

I believe the only hope is for Christians to repent of the sin of giving our children to the world for it to develop a secular mindset in them.  Then the home, church and school must unite and address the issue of education biblically!  As Nancy Pearcey puts it in her book, Total Truth,

We have to insist on presenting Christianity as a comprehensive, unified worldview that addresses all of life and reality.  It is not just religious truth but total truth!

Once we do this, we must then be committed to following God’s plan for educating future generations.