Are You Really Free? 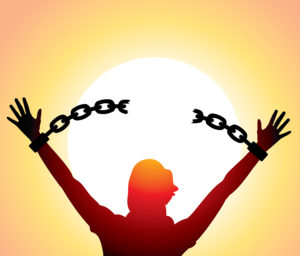 In a couple of days we will celebrate July 4th in the United States.  This date marks a time in history when we declared our independence from Great Britain.  For the past 243 years, the citizens of the United States have fought to maintain their freedom that they cherished so much.

Even though we may be physically free from any tyrannical rule that is so common around the world today, we can still lose our freedom and be held captive in another more devastating way.  Paul warned the Colossian church about the danger of losing one’s freedom.

The word “cheat” means “to plunder” or “take one captive”.  Christians may live in a free country and be held captive at the same time.  The captivity that Paul warns us about is a mental and spiritual one.  Far too many Christians are living in captivity today as they have been cheated through philosophy that  follows the tradition of men and the basic principles of the world.  Simply put, the majority of Christians today have been taken captive by a false worldview.

Christians may live in a free country and be held captive at the same time.

When we are captive to false ideas, we are forced to live our lives in bondage and must follow the bidding of the culture that is in control.  In his sermon this morning, Pastor James McMenis, talked about how Christians many times find themselves living as pawns and not kings.  He defined a pawn as one who must advance another person’s agenda.  In chess, a pawn is described as one of eight least valuable pieces of the game.  The Cambridge dictionary describes a pawn as one who is controlled by others for their own advantage.

The majority of children and youth from Christian homes are educated in a secular system of education that is determined to make them captives of a secular worldview.

When a Christian finds himself/herself captive to false ideas, the only way to freedom is to go on offense and take each and every thought one has about every area of life captive to Christ.

Even though we may be pawns of a false worldview, we can find true freedom by following another one of Paul’s admonitions to the church.  In his second letter to the church in Corinth, Paul writes,

For though we walk in the flesh, we do not war according to the flesh. For the weapons of our warfare are not carnal but mighty in God for pulling down strongholds, casting down arguments and every high thing that exalts itself against the knowledge of God, bringing every thought into captivity to the obedience of Christ, and being ready to punish all disobedience when your obedience is fulfilled.  2 Corinthians 10:3-6 (NKJV)

When a Christian finds himself/herself captive to false ideas, the only way to freedom is to go on offense and take each and every thought one has about every area of life captive to Christ.  Since Jesus is the Word, this passage is telling us that our thoughts must be in line with God’s Word.  True freedom comes from thinking biblically about all of life.  In Romans 12:2, Paul exhorts Christians to be transformed by the renewing of our minds.  This causes us to no longer be pawns (controlled) of the world.

Of course, this requires that we must read, study and meditate on God’s Word each and every day.  Jesus stressed how important abiding in God’s Word is to His followers.

Then Jesus said to those Jews who believed Him, “If you abide in My word, you are My disciples indeed.  And you shall know the truth, and the truth shall make you free.”  John 8:31-32 (NKJV)

Here Jesus is talking to Christians, those who believed Him.  He urges them to not be merely believers but become His disciples.  According to these verses, a disciple of Jesus Christ is one who abides in His Word.  What is the result of becoming a disciple?  A disciple will know the truth and be set free.  Free from what?  Free from being captive to false ideas and living a life in bondage to the principles of the world.

At a time when we celebrate our political freedom from tyrannical rule, lets make our freedom complete by renewing our minds, taking every thought captive to the Word, and becoming a disciple of Jesus Christ.

At a time when we celebrate our political freedom from tyrannical rule, lets make our freedom complete by renewing our minds, taking every thought captive to the Word, and becoming a disciple of Jesus Christ.  Then, lets provide our children with a kingdom education that will lead them to think and act from a biblical worldview.  It’s time to celebrate our freedom in Christ!