A Sense of Urgency! 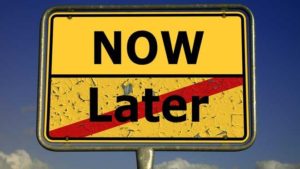 Recently, I had the privilege of speaking at a worldview conference sponsored by Precept Marketing and BJ Press at the Creation Museum.  These conferences are conducted 3-4 times a year at various venues around the country.  The team of speakers that has been put together is impressive, to say the least.  Jeff Keaton, chairman of Renewanation, George Barna, Ben Schettler, President of the Center for Truth in Love, and Dr. Brian Smith, BJ Press always bring very challenging messages on the importance of developing a biblical worldview and teaching from that perspective.  Dr. Ken Ham closed out this specific conference.

The reason why I am mentioning this in this week’s blog is that I came away from this conference with a greater burden about what type of future our children and youth will be faced with.  There was a different spirit throughout this 3-day conference than what I had sensed in others.  Each and every speaker closed his presentation with a strong challenge to the Christian educators present to be more determined to instill a biblical worldview in the hearts and minds of their students.  There was a sense of urgency like I had not experienced previously.

As I have been contemplating all that was presented and praying about how to move forward in my own ministry, I continuously came across articles and other information that caused me to realize the enormity of the crisis that is facing us in today’s culture.  I saw a commercial that someone had referenced as being the “creepiest commercial” he had ever seen.

This commercial was produced by Coca Cola for its Argentinian audience.  It shows parents and others preparing young people in drag and other LGBTQ symbols for participation in a “Pride” event.  It is shown with a soothing rendition of the song, You Will Never Walk Alone, being played in the background.  Toward the end with teenagers going off to join a “pride parade” with who I supposed was a father watching and these words on the screen.  What you feel when someone wants to choose to be happy.  The screen then shows these words before showing the Sprite logo.  You are not alone!  As I watched this in disbelief, I was once again hit with a sense of urgency.

Right before leaving for church this morning, I came across an article that shook me even more than this commercial had.  This wasn’t something that was shown in another country.  Rather, this was a report about something that happened right here in my backyard, so to speak.  This article reported on what happened in a public school in Texas a short time ago.  The Stream published an article on November 16th with the main title, Texas Teacher Defends Drag Queen Class.

The sense of urgency that I am burdened about is where are Christians — parents, church leaders and educators — when it comes to our worldview beliefs.

The article reported about a Cosmology class at this school that invited a drag queen to come into the class to “teach students how to apply makeup.”  As you might expect, this resulted in an outcry by many parents who took their concerns to the district’s school board meeting.  Even though this should have been enough for parents, especially Christians, to stand up and say enough is enough, there was even something more outrageous that was included in this article.  It was reported that another teacher in the school posted these thoughts on social media.

I believe that raising a child is the responsibility of the community, and that parents should not have the final say. Let’s be honest, some of you don’t know what is best for your kids.  Parents believe they should be able to storm the school in the name of political and religious beliefs if something happens in the school that they are morally opposed to. They forget that we make a promise to prepare their children to live in a diverse world. We are not required to protect the misguided, bigoted views of their parents. (emphasis mine)

At first, I couldn’t believe that I was reading about how teachers in our society’s school system look at parents and their moral values.  The quote by this teacher also included the following advice to parents.

If you want your children educated with your values, find a private school that will do it. The public education system is not here to serve your archaic beliefs.

Finally, the truth behind the values being taught in secular educational institutions is being boldly announced.  The principal of this school addressed the parents at the board meeting and explained the two major factors that drive their educational decisions.  They are:

She then explained, “If the answer to these questions is no, then we move on. But if the answer is yes, then we are moving in the right direction.”  However, who determines the answers to these questions?  It is not the parents!  It is the educators!  The teacher who posted the above statements on social media also spoke at the meeting and boldly stated, “I think as a district we need to make an initiative to teach our kids to be tolerant and respectful.”

Driving to church I was overwhelmed by the sense of urgency that had been weighing heavily on my mind ever since I left the Creation Museum a few days ago.  However, the sense of urgency was not about how dark the culture around us is becoming.  It is not about what the media is bombarding our young people with or what is happening in secular schools as they indoctrinate the next generation in atheistic and/or naturalistic worldviews.  The sense of urgency that I am burdened about is where are Christians — parents, church leaders and educators — when it comes to our worldview beliefs.

Kingdom education only takes place when God reigns as king in the entire educational process.

If Barna is accurate with his research, the reality is that a very small percentage of Christian adults possess a biblical worldview.  When this is looked at from a generational perspective, it is clear that the younger generations are less likely to think biblically about all of life.  In fact, only 4%, 1 of 25, of individuals that make up the Millennial Generation (which is the primary parenting and teaching generation today) has a biblical worldview.

Over the past several years, the conviction about the absolute necessity of providing a kingdom education to children and youth has taken a firmer grip on me than ever before.  So that you understand what I mean by this, please note that kingdom education only takes place when God reigns as king in the entire educational process.  For God to reign as king in the education provided children and youth at home, church and school, every parent, church leader and educator must know what God’s Word says about education.  This requires those of us who are influencing the next generation to embrace a biblical philosophy of education and develop a strong biblical worldview.  This won’t happen when we attend a workshop on these topics and then move on to other things.  Since I have been involved in the teaching profession for over 50 years, I understand that I have to continually renew my mind and intentionally study to better understand God’s plan for educating future generations.  If this is not being done on an intentional and continual way, will Christian schools be an answer to the madness that is happening in secular schools each and every day? Do you sense the urgency?