We Have To Be Ready! 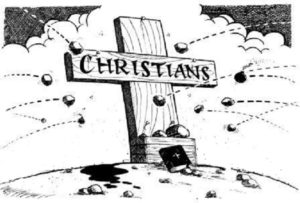 For the past couple of weeks I have been sharing with you some of the cultural battles that we are facing and how it impacts the education we give our children.  There is no doubt about it.  We are in an intense culture war for the hearts and minds of future generations.  It is important that we understand the intensity and seriousness of this cosmic battle.  However, what is more important is that we are prepared for what we most likely will be facing in the very near future.

I read a blog that was written by Dr. Irwin Lutzer a couple of days ago.  Dr. Lutzer has consistently sounded warnings about how we, as Christians, are facing similar challenges that Christians in Hitler’s day experienced.  Some of his earlier writings were quite frightening to say the least.  I found this recent article to be equally alarming.

In his post, he shared what happened to a pastor and his church a few weeks ago.  This particular congregation is facing some pretty intense persecution.  These attacks are a result of a sermon that the pastor preached on October 13th.  The sermon was taken from Genesis 1.  As part of the pastor’s series on Genesis, the pastor preached on Genesis 1:27 and what God says about gender.  He explained what this verse clearly states.

So God created man in His own image; in the image of God He created him; male and female He created them. Genesis 1:27 (NKJV) (emphasis mine)

Lutzer noted that the message was “thoughtful, welcoming, and non-judgmental.”  You probably have guessed what happened on Monday following this sermon.  There was a social media firestorm that brought strong condemnation on the pastor and the church.  Lutzer explained,

The current culture rejects civil discourse, rational discussions, and honest evaluations of biological and scientific evidence accepted by many doctors which state that gender tampering can be harmful for children and, for that matter, adults.

He went on to state,

Simply raising these questions has resulted in hatred and vilification of anyone who dares to ask.

The point that I took away from this post was that anyone who stands for truth and biblical morality better be ready for strong opposition and even persecution.  We are already seeing early signs of this and it is only going to intensify as we continue living in a secular society.  I found it interesting that when I opened my Bible app the other day to read the Verse of the Day, it said this.

Blessed are those who are persecuted for righteousness’ sake, for theirs is the kingdom of heaven.  Blessed are you when they revile and persecute you, and say all kinds of evil against you falsely for My sake.  Rejoice and be exceedingly glad, for great is your reward in heaven, for so they persecuted the prophets who were before you.  Matthew 5:10-12 (NKJV)

Lutzer decries that the church has succumbed to the idea that Christians must be known for what they are for and not what they are against.  This has led to a deafening silence about major cultural issues.  The consequences of this silence can be disastrous.

The point that I took away from this post was that anyone who stands for truth and biblical morality better be ready for strong opposition and even persecution.

Lutzer challenges Christians to face the moral crisis of our day with courage.  In fact, he explained that,

It has been aptly stated that “a Christianity without courage is cultural atheism.”

Christian parents, church leaders and educators must be equipped for battle!  This is especially true when it comes to giving our children and youth a biblical education.  I found several questions swirling in my mind as I thought about the coming battle that we most surely will face.

We must become more intentional on instilling a biblical worldview and biblical philosophy of education in the hearts and minds of our teachers and parents.

These are the real questions that are key to the sustainability of biblical worldview education in a pagan society.  The answers to these questions will, I believe, depend on whether or not our staff and board members, parents and church leaders develop a strong biblical worldview and know, understand and are committed to a biblical philosophy of education.

My fear is that many will not be prepared for this challenge.  I continue to be concerned about the lack of staff development on these critical matters.  I am not suggesting that we ignore methodology and best practices.  What I am saying is that we must become more intentional on instilling a biblical worldview and biblical philosophy of education in the hearts and minds of our teachers and parents.  That is what Kingdom Education Ministries is all about!

As Lutzer put it, silence is not an option.  However, if we don’t think biblically, we won’t have anything to say!  Lutzer’s closing words need to be heeded by all of us.

I think I hear Him [God] saying to us what He said to the church in Sardis:  “Wake up and strengthen what remains.”