What Does It Mean? 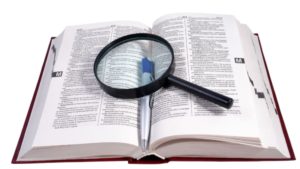 It is amazing to see how the meanings of words change over time.  Unfortunately, many Christians fail to understand that this is even happening.  This results in them using words and thinking that everyone is defining them the same way they are.  The end result is utter chaos.

My good friend, Mark Kennedy, recently sent me a brief article. Mark is the ACSI Director for Eastern Canada.  In the article, he illustrated the results that take place when definitions change or people use words without really knowing the true meaning of them.  He wrote,

Over time, the definitions of words change – occasionally they change quite a bit. An innocuous example is the word ‘silly’ which comes from the old English word ‘saleg’ meaning ‘happy’. Over many decades that meaning (and spelling) changed gradually so that saleg – ‘happy’-, came to mean ‘blessed’, then ‘pious’. From pious its meaning changed further to ‘innocent’, from ‘innocent’ to ‘naïve’ and then from the mid 16th century on, it evolved into its current meaning – ‘foolish’.

Over the centuries, some definitions just evolved on their own. But in our day, the functional meanings of a few key words have been intentionally altered for political and/or social engineering purposes. The word “Gay” is a prime example.

And for other words, their common daily usage has come to mean the exact opposite of their long-established definitions. So ‘tolerance’ now implies the furious rejection of any perspectives except those promoted by the wielders of worldly power. And ‘inclusiveness’ carries with it the intentional and scornful exclusion of anyone whose beliefs conflict with ‘political correctness’.

Most of us can relate to what Mark is saying in these few sentences.  You may have even been accused of being bigoted or worse because of how you “misused” some of these words.  Mark went on in his article to show how the changing of definitions has affected education.

A liberal education is one that sets students free according to God’s standards: the very thing I hope we are doing in Christian schools.

Along the same lines, the term ‘liberal’ has been so misused in our culture that its roots are obscured. ‘Liberal’ comes from the Latin “liberare”, meaning ‘to set free’.  According the original meaning, the word ‘liberal’ isn’t about the rejection of traditional ideas or the unquestioning acceptance of the new.  From its root, the word ‘liberal’, is all about freedom.  This makes me think of Jesus’ words, “It is for freedom that you have been set free!” Gal 5:1. And of course, the Scriptures defines what freedom really is and who is able to supply it.  So, a ‘liberal’ education is one that sets students free according to God’s standards– the very thing I hope we are doing in Christian schools.

As I read this brief article, I asked myself this question.  Are we providing students with an education that sets them truly free?  Jesus also spoke these words.

Then Jesus said to those Jews who believed Him, “If you abide in My word, you are My disciples indeed.  And you shall know the truth, and the truth shall make you free.”  John 8:31-32 (NKJV)

Young People Need an Education that Inspires Them to Seek God’s Face!

If the education we are providing our children is going to set them free, it must lead them to abiding in God’s Word to the point that they will know truth.  When they know truth, they will be made free.  Mark finished his article with a quote by a Catholic theologian named Peter Kwasniewski.  Kwasniewski wrote,

The point of liberal [freeing] education is not to form perfect beings on the model of already perfect beings but to initiate a lifetime of apprenticeship to the one true Master, Jesus Christ, freeing the mind from the debris of a collapsing civilization and freeing the heart from the chafing shackles of confined and self-centered desire. Students who receive such an education are granted the opportunity to find a spiritual freedom that is more precious than all the riches of this world (emphasis mine).

After thinking about the world that our children and youth are growing up in, I found myself in full agreement with Mark’s closing thought.

Young People Need an Education that Inspires Them to Seek God’s Face!