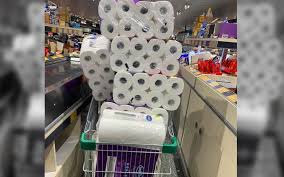 The coronavirus pandemic has turned life upside down in many ways.  With schools closing, many teachers have had to resort to online learning as a means to keep students up-to-date with their studies.  Many people are trying to balance watching their children and working from home.  Others are suffering withdrawal pangs as most sports venues have been shut down.

One of the common practices that seems to take place whenever there is a hint of disruption of everyday life is being witnessed all round the world.  This practice can be seen when a major storm, such as snow or a hurricane, is forecasted.  It is also seen when there is a threat of an economic collapse.  Currently, we see it happening with the panic over COVID-19.

What is this practice?  It is what is called panic buying.  I can remember moving from Buffalo, NY to Lynchburg, VA many years ago.  During one of my basketball practices I was informed that I had to shut down practice immediately because of a snow storm that was approaching.  I couldn’t believe that I had to close practice when it was just starting to flurry in Roanoke, over 50 miles away.

As I drove home on completely dry streets, I saw grocery stores packed with customers rushing in to prepare for the “big” storm.  Within hours, store shelves that once were filled with bread and milk were stripped bare.

Panic buying took an unexpected turn with this new crisis.  What item have people rushed to purchase?  What was this necessity that caused fights between grown adults and shopping carts to be filled to overflowing?  It was toilet paper!

We are a couple of weeks into fighting this dangerous virus and what is everyone talking about?  You guessed it — toilet paper.  As I recently watched several church services streamed over the internet, the only common topic that just about every pastor mentioned was the binge buying of toilet paper.

A couple of days ago, I joined 50-75 other shoppers waiting for Walmart to open its doors.  When the doors were finally opened, I watched grown men and women race down aisles and even climb over and/or through empty shelves hoping to buy this scarce commodity.  The rush for toilet paper screeched to a halt when shoppers got to where they thought they would find their pot of gold only to find empty shelves. 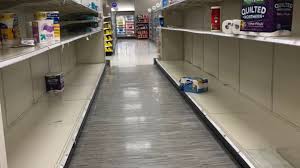 Everyone I come in contact with is asking the same question related to this unusual shortage.  Why toilet paper?  Well, I wanted to see if I could find an answer to this phenomenon that I had been witnessing.  In my research, I came across an article, Here is why people are panic buying and stockpiling toilet paper to cope with coronavirus fears.

In this article, one psychologist explained this unusual behavior this way.

“It’s about ‘taking back control’ in a world where you feel out of control,” he said. “More generally, panic buying can be understood as playing to our three fundamental psychology needs.”

I quickly read through the article to find out what are man’s three fundamental psychology needs.  When I read them, I realized they are all related to how God created us and how sin has distorted and twisted His magnificent creation.  Here is why there is a rush for toilet paper around the world today. It is because man has an insatiable need for:

In the article another psychologist explained why people were filling their shopping carts with toilet paper.  His explanation was that the bigger the fear, the bigger the item everyone rushes to buy.  In this case, one of the biggest packages you will find in a grocery store is toilet paper.

Throughout human history, every person is born with a sin nature. That nature is driven by the desire to be autonomous – to be like God.

As the entire world tries to navigate through this pandemic, one can witness the best and the worse of human nature.  I found it fascinating to read how the main reason for the rush to buy as much toilet paper as possible is man’s need to be autonomous.  The reality is that this drive to be autonomous has its origin in what happened in Eden at the beginning of human history (see Genesis 3).  Satan tempted Eve with the possibility for her to become autonomous and in complete control.

Then the serpent said to the woman, “You will not surely die.  For God knows that in the day you eat of it your eyes will be opened, and you will be like God, knowing good and evil.” Genesis 3:4-5 (NKJV)

Throughout human history, every person is born with a sin nature.  That nature is driven by the desire to be autonomous — to be like God.  This is the driving force behind the theory of evolution.  If man is merely a  product of time and chance, then there is no supernatural being that created everything.  Man, therefore, can do whatever he desires.  To be human is to be autonomous.  He, in essence, is his own god.

The drive to be autonomous only leads to captivity and loss of freedom. God created man to be not only free but also dependent.

Even if science indicates that there must have been a designer behind creation, the autonomous man will not allow that to even be considered.  Why?  It is because if one has to admit that there is someone who designed and created the universe, he/she is, then, accountable to that person.  Fallen man recoils at the very thought that he is accountable to someone other than himself.  The autonomous person believes that this is the only way to experience freedom.

Therefore, man must prove to himself that he is autonomous and he is in complete of his life.  The resulting action is to show the world that I can get everything I need, including toilet paper, by my own efforts.  Man, on his own, will survive any crisis by whatever it takes.  The survival of the fittest mentality is built on the idea that man must do whatever it takes to survive.  This carries with it the belief that there really isn’t any absolute right or wrong.

Unfortunately, the drive to be autonomous only leads to captivity and loss of freedom.  God created man to be not only free but also dependent.  True freedom only comes from living one’s life in total submission to the One who created him/her.

The Bible is full of proof that the only way to be free is to submit to God.  Consider the following examples.

It is freeing to focus on the sovereign God of the universe and simply follow Him as He directs one’s path.

When Jesus addressed man’s worrying over clothing, food and shelter, He told his disciples that they needed to seek His kingdom first.  Then, Jesus said all your needs will be added to your life.  What Jesus was saying was that when you seek God’s kingdom reign in your life, your needs will be met.

I don’t need to rush to the store to hoard toilet paper or any other product.  I merely have to trust God to meet my needs and live my life in submission to His will.  It is freeing to focus on the sovereign God of the universe and simply follow Him as He directs one’s path.  I don’t have to panic.  I don’t have to buy everything I can get my hands on.  I simply have to seek His kingdom first and watch Him provide everything I need — even toilet paper!