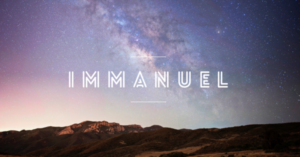 Christmas is almost here!  Are you ready for it?  Have you taken time to think about what really happened 2000 years ago?

It is at this time of year that we hear the word “Immanuel” and when it is spoken, it is usually followed by “God is with us.”  Why is this so important?

I was recently going through some old notes and came across a few references to the book, Sharing God’s Passion, by Paul H. Jones.  Jones makes a profound observation about God’s passion or ultimate desire when he wrote,

What does God want more than anything?  What motivates Him to speak, to act, to make Himself known to us?  As the Bible tells it, from the ‘beginning’ (Genesis 1:1) to the final ‘Amen’ (Revelation 22:21), God desires to live in His creation among us, His creatures…whether we speak of God establishing His kingdom on earth, or renewing His creation, or the covenant vows between God and humanity, God’s underlying passion is the same: to live among the people He created.

Have you ever given this any thought?  We find this passion of God in Genesis 3:8 when Adam and Eve heard the sound of the Lord God walking in the garden in the cool of the day.  It wasn’t unusual for God to “walk in the garden” and be with the two that He had created in His image.

What motivates Him to speak, to act, to make Himself known to us? God’s underlying passion is the same: to live among the people He created.

However, on that day, Adam and Eve hid themselves from God because of the guilt and shame that filled their hearts due to sin.  It is interesting that God’s first words to Adam were, Where are you?

Even though sin had entered the world and man was separated from God, it didn’t change God’s desire to live among the people He had created.  Consider the following passages of Scripture.

And I will dwell among the children of Israel, and will not forsake My people Israel.  1 Kings 6:13 (NKJV)

God chose Israel to be His people and, throughout the Old Testament, His passion was to dwell and walk in their midst.  However, this could only take place temporarily until something amazing happened.  John captured the essence of Christmas when he wrote under the inspiration of the Holy Spirit,

Even though sin had entered the world and man was separated from God, it didn’t change God’s desire to live among the people He had created.

God sent His Son to earth, born of a virgin to dwell among us — Immanuel!  God’s passion to live and walk among His people became a reality for all of eternity!  When a person is born again, he/she is indwelt by the Holy Spirit and his/her body becomes God’s temple.

Do you not know that you are the temple of God and that the Spirit of God dwells in you?  1 Corinthians 3:16 (NKJV)

Why does God’s Spirit indwell a believer?  It is to fulfill God’s desire to live with His people.

For you are the temple of the living God. As God has said: “I will dwell in them and walk among them.  I will be their God, and they shall be My people.”  2 Corinthians 6:16 (NKJV)

Of course, God’s passion to live with His people will become an eternal reality when this old earth passes away and a new heaven and earth will be brought into existence.

Now I saw a new heaven and a new earth, for the first heaven and the first earth had passed away. Also there was no more sea. Then I, John, saw the holy city, New Jerusalem, coming down out of heaven from God, prepared as a bride adorned for her husband. And I heard a loud voice from heaven saying, “Behold, the tabernacle of God is with men, and He will dwell with them, and they shall be His people. God Himself will be with them and be their God.”  Revelation 21:1-3  (NKJV)

As you and I prepare for Christmas, may we celebrate the amazing coming of Immanuel and because of that first Christmas morning, God is with us!  May God find our hearts clean and pure for Him to dwell and walk among us.

I will be taking time to be with family so I won’t be posting a weekly blog.  I look forward to sharing with you in 2021.  Have a blessed Christmas and joyous New Year!