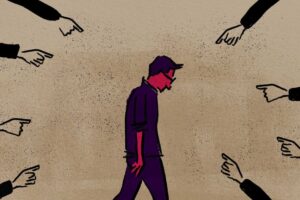 This became very evident to me this past week.  There wasn’t a day go by when I didn’t read an article of how Christianity was under full assault by a totally secularized culture.  Let me share a couple of examples of what came across my desk in just the last few days.

This is what was presented in an article published by the Huffington Post.  The article tried to attach biblical worldview textbooks to a political ideology.  The title and subtitle of the article made this clear.  They read,

As I read the article, it was apparent that if you try to look at life through a biblical worldview and not a secular one, you are a danger to society and democracy.  Of course, that means that if I teach students from a biblical worldview and use textbooks written from that perspective, I am an even a greater danger to society because I could possibly be influencing the next generation to become, what the article referred to as, Christian nationalists.  The article inferred that teaching from textbooks written from a biblical worldview leads to the anti-science culture, anti-elite, the identification of Christianity with the military culture.

After reading this article, I was bombarded by reports of what happened when Christians stood for biblical truth and opposed the President’s recent executive orders related to transgenderism.  Two professors at Christian universities were banned from a social media site because they disagreed with the President’s policy on transgenders in the military.  The reason given for such a ban was that their posts violated the site’s Community Standards on violence and incitement.

Then came an article about what happened to a lecturer at another Christian university when she stood on biblical truth when it comes to moral values.  This instructor publicly asked the question, what about parents who don’t want a biological male in their biological daughter’s restrooms?  Such a question was reason for students at the university to report this instructor to various “equity” and “diversity” departments at the university.  The article quoted one of the students who made these reports as being upset because it eliminates another professor as one of our allies, because we have been searching for potential allies and professors for the past 10 years.

The goal of the secularists is to shame us into silence.

These are just a few examples of articles that I came across over a period of a few days.  There is no doubt about it; we are living in Babylon.  We may not be in bondage geographically but we are in spiritual and moral bondage to a secular, pagan culture.  If you publicly take a stand for God, His Word and absolute moral values, you will be attacked.  If you stand against such ideologies as CRT, you may be called a racist, white supremacist, etc.  If you believe that God created man in His image and He did so as either male or female, you are homophobic and/or transphobic.

Living in Babylon means that we are living in a culture where the only public discourse allowed is that which goes along with the religion of secular humanism.  This becomes even a greater problem when you consider how the secular culture has taken over the meaning of words.  Words such as unity, diversity, science, and equity must be defined according to secular thought.  If anyone dares define them in accordance to God’s Word, he/she is anti-science, a bigot, ignorant, offensive, and/or counterfactual.  The goal is to shame that person to such a degree that it will silence him/her.

This is the same strategy that the late, postmodern professor, Dr. Richard Rorty, suggested when he addressed a group of university professors.

Secular professors in the universities ought to arrange things so that students who enter as bigoted, homophobic religious fundamentalists will leave college with views more like our own.  Students are fortunate to find themselves under…people like me, and to have escaped the grip of their frightening, vicious, dangerous parents.  We are going to go right on trying to discredit you [parents] in the eyes of your children, trying to strip your fundamentalist religious community of dignity, trying to make your views seem silly rather than discussable.

This shouldn’t surprise any of us.  In the early 1900s, Italian socialist, Antonio Gramsci, wrote,

Socialism is precisely the religion that must overwhelm Christianity.  Socialism will triumph by first capturing the culture via infiltration of schools, universities, churches and the media by transforming the consciousness of society.

The question confronting Christians today is not how to get out of Babylon but how does God want us to live while we are here?  Erwin Lutzer in his book, The Church in Babylon, rightly states that there are three options for how Christians can choose to live in a pagan, anti-Christian culture.  They are:

If you publicly stand for God, His Word and absolute moral values, you will be attacked.

The reality is that it is impossible to isolate ourselves from today’s secular culture.  It is all around us and escape is not possible.  This means that Christians will either assimilate into the culture or engage it.  Lutzer explained what happened when Israel was taken captive by the Babylonian king.  Most of the Jews just drifted with the cultural flow, not making waves but living lives that were indistinguishable from the people around them.

Unfortunately, today’s church seems to be following the example of these Jews.  Lutzer goes on to explain why this is so common when he wrote,

Spiritual assimilation is always the path of least resistance; it is the most natural and cowardly way to life. It allows the culture to exploit our natural tendency to get all the world has to offer with only a nod in the direction of the God we say we love.

God wants us to engage the secular culture in which we find ourselves.  However, it is evident that, by doing this, we will face persecution.  Jeremiah was a prophet who obeyed God and engaged the culture of his day.  When engaging the culture, he started by doing so with God’s people.  Jeremiah poured his heart out to the Israelites.  He spoke only what God told him to say.  What was the result?  Again, Lutzer explains what was Jeremiah’s reward for his faithfulness.

He was rewarded with slander, mockery, and condemnation by false prophets.

Just like today, secular leaders tried to shame Jeremiah into silence.  Of course, we know that Jeremiah didn’t bend under the pressure, and neither can we.  Over the next couple of weeks I want to share with you some things that God has been laying on my heart as to what He wants from His children today as we find ourselves in Babylon.