The Saddest Day In American History?

I think a lot of people were hoping that once 2020 ended and a new year began, life would be better.  However, having witnessed what has happened in the country in just the first week of 2021, I believe we are in for some very difficult days.  A lot of attention has been given to the events that took place in the nation’s capital this past Wednesday.

I have to admit that I did not watch or listen to the coverage of the march that took place in Washington DC, the joint session of Congress or the “news” coverage of the violent entering of the Capitol Building by a group of rioters.  I have stopped watching/listening to the “news” for some time now as reporting the news has ceased to take place and has been replaced by the spouting of one’s ideology/worldview.

When a group of rioters broke into the Capitol Building, my Twitter feed exploded.  Most of the people I follow on Twitter are Christian leaders.  There was a common theme that most of these leaders tweeted.  They all were referring to what was unfolding in Washington, DC as the saddest day in American history.

This phrase has captivated my attention ever since then.  Was Wednesday, January 6, 2021 really the saddest day in the history of our country?  Should we be shocked at what has been taking place before our very eyes over the past few years that seemed to come to a climax on that day?  Are we troubled over the censoring of free speech that has escalated since Wednesday?

As I contemplated all that was swirling around me, God reminded me of the very first creation ordinance 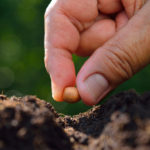 He established by which He would govern and sustain His creation.  This creation ordinance was established whenever He created a new form of life.  This ordinance is found in these words, according to its kind.  God set in motion the principle that one harvests what one plants!

Plants reproduce only have their own kind, as do birds, fish and animals.  Of course, humans also have to obey this creation ordinance and will only reproduce other men and women.  This life principle doesn’t only apply to reproduction but also to all of life.  That is why Paul wrote,

What we have recently witnessed and continue to watch unfold before our eyes is simply the harvest of what we have sown over the years.  As I thought of this, Erwin Lutzer’s book, When a Nation Forgets God, came to my mind.  Lutzer wrote this book warning us about what happened in Germany that led to the rise of Hitler and terrible worldwide devastation.

Our Constitution was made only for a moral and religious people. It is wholly inadequate to the government of any other.

There is no doubt about it, our country has forgotten God.  He has been removed from public discourse and there has been a slow but constant purging of any reference to Christianity in our legislative and judicial systems.

Today the rule of law really doesn’t exist.  This is because there is no longer a belief in absolute moral values.  Truth is relative and the Bible is no longer the foundation our legal system.  Legislators act and judges and justices make rulings based primarily on their individual beliefs and values.  This is a far cry from what Alexis de Tocqueville saw when he visited America in 1831 to see why we were so prosperous.  He observed,

In America, religion is the road to knowledge and the observance of divine law leads man to civil freedom.

By forgetting God in our country, we have become a completely secular society.  The reality that has resulted is that even the Constitution is open to individual interpretation because its foundation, which was taken from the Scriptures, has been destroyed.  We are a nation where everyone does what is right in his/her own eyes.  In 1798, John Adams predicted that if the nation forgot God, the government that the founders had established would lose all of its power.

Our Constitution was made only for a moral and religious people. It is wholly inadequate to the government of any other.

When contemplating this reality, I question whether January 6, 2021 was the saddest day in American history.  Even though no one can put a specific date down, the saddest day in our history may be the day when the nation forgot God.

Even though the consequences that we are reaping because the country has forgotten God are frightening, these terrible results pale in comparison to what we are reaping because the church has forgotten God.  In past blogs I have shared the statistics that show today’s Christians are the most biblically illiterate generation in modern day church history.

We are a people with a true, sometimes a deep, experience of God.  But we are no longer people of truth.

Guinness was stating what Blamires already realized when he wrote The Christian Mind in 1963.

We are a people with a true, sometimes a deep, experience of God. But we are no longer people of truth.

The mind of modern man has been secularized..the Christian mind has succumbed to the secular drift with a degree of weakness and nervelessness unmatched in Christian history…There is no longer a Christian mind.

Guinness went on to explain what happened when the Christian mind disappeared in today’s church.

Failing to think Christianly, evangelicals have been forced into the role of cultural imitators and adapters rather than originators.

Maybe this is why, throughout 2020, I heard more from church leaders about Critical Race Theory than I did about how God created one race in His image and the real problem is man’s sinful heart with the answer being the Gospel and not what the world is putting out in its theories and philosophies.

From 1700 to the Civil War there was a long, slow retreat from the Christian mind to the creation of a “ghost mind.” A “ghost mind” has few distinctively Christian strengths left.

From the Civil War to the present there has been a long, slow rise of a mass mind and the creation of an “idiot culture.”

Many might disagree with me and say that God has not been forgotten in the church.  But listen to what John Piper observed about us.

Man is the star in our contemporary drama and his comfort, his prosperity and his health are the great goals.  Of course God is there on stage, but only as a kind of co-star or supporting actor to round out the picture for religious and cultural expectations.

I will never forget reading something that Dr. Jimmy Draper sent to all of the employees when I was at LifeWay.  Draper told us that he had read a quote that had haunted him for over 20 years and he could not refute what this person said.  More than 30 years have now passed since Anglican priest David Watson made this profound prediction.

It is widely held that the battle of the century will be between Marxism, Islam, and Third-world Christianity.  Western Christianity is considered too weak and ineffective to contribute anything significant to this universal struggle.

How did the nation and the church forget God?  How did we get to where we are today?  It has been a slow, long and deliberate journey to get us to our current condition.  The vehicle that has brought us here is the secular educational system that has shaped the hearts and minds of the current adult population.  Christian parents and church leaders have voluntarily and, in many ways, enthusiastically placed their children on this bus for several generations and we are now reaping the harvest.

The vehicle that has brought us here is the secular educational system that has shaped the hearts and minds of the current adult population.

I can well remember sitting and listening to Dr. Christian Smith present his findings from a massive research project he was conducting on religion and North American youth.  One of his statements that still haunts me today is,

The lives and faith of most youth closely reflect the lives, faith, culture and institutional values of the adult world they inhabit. Youth are good barometers, telltale indicators of the larger adult culture.

Smith, then, made this startling statement.  We will get what we are!  The reality is that we have educated several generations of young people to think and, therefore, act from a secular, anti-Christian worldview.  In their book, Already Compromised, Ken Ham and Greg Hall explain it this way.

It is possible to raise kids in church and subsequently turn them over to secular institutions for education without having thought through the potential outcomes of them losing faith in the process…We have turned over generation and generation of young men and women to be fully inculcated with the thoughts, ideas, and precepts that are absolutely contrary to our Christian faith…the Church systematically, seemingly without guilt, turns one generation after another of children over to a pagan, godless, secular education system that turns them from the faith.  We do it in public elementary and high schools and colleges and  universities.  And we pay the enemy to steal their souls.

Frank Gaebelein noted that this was taking place when he wrote Education in a Democracy back in 1945,

The fact is that, as both home and church have lost their grip on American youth, the people of this country have looked to education to fill the gap…With a confidence that would be touching were it not based on evasion of responsibility, [parents] have turned their youth—body, mind and spirit—over to the most extensive and highly organized system of education that the world has ever known.

What we witnessed this past Wednesday and for much of 2020 are basically the consequences of the seeds we, as Christians, have planted in the hearts and minds of past generations through secular education.  WE HAVE GOTTEN WHAT WE HAVE BEEN!

Maybe the saddest day in American history is that day when Christians turned the education of their children over to the State.  So, where do we go from here?  What does the future hold for us?  My good friend, Mark Kennedy, made a comment on last week’s blog that I believe answers these questions.  Mark has witnessed similar things that are happing here take place in his country of Canada.

It’s pretty clear that, barring a continent-wide spiritual revival, the last faint vestiges of a biblically-based society will soon disappear. It will, of course, be replaced by a new kind of society – one where our ideas about truth, morality and freedom of speech won’t be tolerated. And so we will join the multitude of believers throughout history whose version of a normal life was (and still is) a constant state of persecution.

Jesus said that those of us who name the name of Christ will suffer persecution.  Are we ready for it?

As I close this blog, I am wondering if the saddest day in American history has yet to take place.  Maybe the saddest day in our history will be every day that believers, starting with me, don’t fall on our knees before a holy, just, and righteous God, confess our sin, repent of our evil ways, throw away our idols and beg Him for forgiveness and mercy.  I am finding it hard to pray and ask God to bless our country but I am praying that God will have mercy on us!