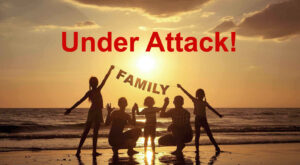 I have witnessed an attack on the family like I have never thought possible.  This attempt to destroy the family isn’t new but it has accelerated at an unprecedented rate over the past couple of years.  It seems like even the government wants to make the family powerless and nonexistent.

During the month of December I found myself studying the role of the home as it relates to the education of children.  As I studied this topic, I was convicted that the home does not have the position of priority that God desires it to have.  One of the resources I pulled out to study was Dr. Robert L. Dabney’s Discussions published in 1897.  Dr. Dabney was a professor of theology in the Union Theological Seminary in Virginia and a professor of moral philosophy in the University of Texas.  He was an outspoken critic of State sponsored “public” schools.

ln an 1876 letter to W.H. Ruffner, Superintendent of State Schools in Virginia, Dabney got right to the major objection that he had against public schools.

…the principle upon which the State intrudes into the parental obligations and function of educating children is dangerous and agrarian.  It is the teaching of the Bible and of sound political ethics that the education of children belongs to the sphere of the family and its the duty of parents.

He went on to state that,

The parents are the real architects of their children’s destiny, and the State cannot help it.

Dabney was even more forcible in demanding that parents control their children’s education in another letter to Ruffner that same year.  In this letter he wrote,

The parents are the real architects of their children’s destiny, and the State cannot help it.

Since religious education is so essential a part [of education], it is obvious that a wise Providence must have allotted the right and duty of giving it to some other of the independent spheres between which He has distributed the social interests of man.  This duty rests with the parents.  Such is the Protestant doctrine–the Bible doctrine.  Neither State nor Church are to usurp it; but both are to enlighten, encourage and assist the parent in his inalienable task.

I have also been reading a transcript of a sermon my former pastor, Dr. Glenn Weekley, gave back in 2002. In this sermon, Weekley boldly explained,

One of the verses Dr. Weekley referred to was Deuteronomy 6:7.  In explaining this verse, he noted,

God said that this whole teaching system starts with parents. It’s our responsibility as parents to provide our children with a truth apologetic.

It is critical that the family be given its rightful place in society in general and in educating future generations specifically.  God designed the family to be the primary place where children will be nurtured and trained.  Once again, consider the words of Dr. Dabney in his discussion on Secularized Education.  He gave three reasons why parents must be responsible and in control of their children’s education.

First, we read in holy writ that God ordained the family by the union of one woman to one man, in one flesh, for life, for the declared end of “seeking a godly seed.”  He also in the fifth Commandment connected the child proximately, not with either presbyter or magistrate, but with parents.

This argument appears again in the very order of  the historical genesis of the family and State, as well as of the visible Church.  The family was first.  Parents at the outset were the only social heads existing.  The right rearing of children by them was in order to the right creation of the other two institutes.

Second, the dispensation of Divine Providence in the course of nature shows where the power and duty of educating are deposited.  That ordering is that the parents decide in what status the child shall begin his adult career.

Third, God has provided for the parents social and moral influences so unique, so extensive, that no other earthly power, or all others together, can substitute them in fashioning the child’s character…Doubtless God has deposited the duty in the safest place.

Today, most people have added the school as an institution along with the home, church and state.  Of course, as Dabney pointed out, God only ordained three institutions–the family, the State and the Church. In many ways we have gotten some things backwards.  One common way of saying this is that we may have put the cart before the horse.

God has provided for parents social and moral influences so unique, so extensive, that no other earthly power can substitute them in fashioning the child’s character.

It appears that many people, including a vast majority of Christians, think that if we have the right government and excellent schools, we will develop strong families.  The truth is that strong, biblically based families are needed to produce a godly citizenship and build strong churches.  Dabney saw this back in his day when he wrote,

The competitions of the State and the Church for the educating power have been so engrossing that we have almost forgotten the parent, as the third and the rightful competitor.  And now many look at his [parent] claim almost contemptuously.  Because the civic and ecclesiastical spheres are so much wider and more populous than his [parent], they are prone to regard it as every way inferior.

As I begin another year of ministry, God has convicted me about the need to empower the home.  We must give greater attention to helping parents understand their God-given responsibility when it comes to educating their children.  Then, we must come alongside of them and give them the support needed to accomplish this all-important task.  I will be addressing more about empowering the home over the next couple of weeks.

That is also why we decided last month to expand the KEM Prime Member benefits to include the enrolled families in all  member schools.  Any school that is a KEM Prime Member can now share the school’s generic Username and Password with their families.  This will give parents full access to these valuable training resources.

It was exciting to see so many new schools become members in December.  If your school is not a member, this is a great time to join.  Simply click HERE to begin the process.  Be sure to include the special discount coupon, KESDISC21, and receive a $50 discount off of the already low annual rate.  We need to train as many parents as possible in 2021.

Don’t forget to register for the Kingdom Education Summit this summer.  This event will focus on how we can restore individuals, empower the home, engage the church and transform the school through kingdom education.  To find out more information about being a part of this exciting event click HERE.