The Goal of All Education 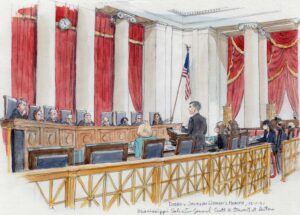 This past week was an interesting one to say the least. One of the highlights of the week was having the opportunity to sit down and talk with Drs. George Barna and Tracy Munsil. Dr. Barna is the Director of Research at the Cultural Research Center (CRC) while Dr. Munsil serves as the Executive Director of the Center. The CRC serves as the biblical worldview research and resource arm of Arizona Christian University.

At this meeting we discussed CRC’s findings that have been published in the book, American Worldview Inventory 2020-21. The findings of this study are quite troublesome as they relate to the state of today’s Christian adults. There were a couple of statistics that stopped me in my tracks.

I found it fascinating that 50% of American adults accept the orthodox biblical view of God as one who created and controls the universe; is omnipotent, omniscient, and without fault; and is just in His decisions. However, only 34% of these adults believe that God is involved in their lives. God exists but He doesn’t influence my life is what these statistics are telling us.

Another startling finding in this study reflects the beliefs of adults concerning the existence of moral absolutes.

Forty-eight percent of born again Christians believe that identifying moral truth is up to each individual and, therefore, there are no moral absolutes that apply to every person, all the time.

This reality plays out as Christians are equally likely to turn to one of three sources for moral guidance.

As I dug deeper into this annual report, certain things in today’s culture became more and more understandable. One example of this concerns today’s debate over abortion. Most of you are aware that the Supreme Court recently heard oral arguments in the Dobbs v. Jackson Women’s Health Organization case. This case may determine the future standing of abortion in the country.

The sanctity of human life is not a social justice issue; it is a biblical moral issue!

In light of this Supreme Court case, consider some additional findings of the CRC’s Worldview Inventory. The Inventory asked adults what they would do if someone came to them and asked for advice about getting an abortion. The responses were heartbreaking.

These findings are a clear illustration of the belief that every individual must determine moral truth on his/her own. This caused me to understand why Justice Sotomayor made the following statement related to a baby in the womb reacting to something painful taking place.

There’s about 40 percent of dead people who, if you touch their feet, the foot will recoil. There are spontaneous acts by dead brain people. So I don’t think that a response to — by a fetus necessarily proves that there’s a sensation of pain or that there’s consciousness.

What really caused me dismay as I was following this case was seeing some of the reactions to it from Christian leaders. One pastor was remarking on social media how encouraging it was to see evangelicals coming together in unity in their concern over abortion. However, he went on and made this statement in the Tweet.

This proves that evangelicals really do care about social justice issues. (emphasis mine)

The sanctity of human life is not a social justice issue; it is a biblical, moral issue! The Bible clearly states that God created man in His image. It also says that God knows individuals before they are shaped in their mother’s womb (Jeremiah, Jeremiah 1) and that He carefully knits each of us together while in the womb (David, Psalm 139).

You may be wondering why I am writing on these issues. It is because the American Worldview Inventory 2020-21 simply shows us the sad condition today’s church is in. If we don’t recognize the problem, we will not know what needs to be done to change what is taking place in our country each and every day before our very eyes.

All education is religious in nature. There is no such thing as a spiritually neutral education.

The findings I have shared and the confusion there is on biblical moral values are only symptoms of a much deeper problem. What is happening in our homes and churches is the result of decades of secular education that has shaped the worldviews of its students.

Christians must come to grips with a truth that I have written about on many different occasions. All education is religious in nature. There is no such thing as a spiritually neutral education. Alan Bloom in his book, The Closing of the American Mind, makes this point with these challenging words.

Every educational system has a moral goal that it tries to attain and that informs the curriculum. It wants to produce a certain kind of human being.

Secular, humanistic education wants to produce human beings who do not believe in God nor His Word. It wants to produce autonomous individuals who will do whatever is right in their own eyes. What Dr. Barna reported in this annual worldview inventory is the end product of an educational system aimed at doing away with Christianity having any influence in society.

Battles over things such as abortion will never end unless we change the way we educate future generations. More than ever before in our country’s history we need to make sure the home, church and school is united on a biblical worldview foundation and, together, are determined to make disciples of the next generation.

The information shared in this blog is taken from American Worldview Inventory 2020-21: The Annual Report on the State of Worldview in the United States by George Barna.