The Only Solution To Our Problems

Over the past several months I have been wrestling with how to address all of the turmoil and hate that is in the world today.  I have attempted to write about this struggle on several occasions but I didn’t have peace about it.  It seemed like anything that I wrote would only stir up more division and strife.

Then I saw a diagram that hit me between the eyes.  It pictured the real problem behind all the insanity that has taken over society.  However, it also pictured the only solution to all of our problems.  This diagram depicted the battle that has been going on throughout human history.  It is the cosmic battle of worldviews that we face each and every day because we live in a fallen world.

There are only two ways that you and I look at and interpret every area of life.  I have written about these two ways before but I never saw it like I did when I studied this diagram.  The two options we have when trying to make sense out of life are:

I realized afresh that I can try to make sense out of life by allowing God to interpret or define it or trying to interpret life through man’s thinking.  I am going to present these two options with two diagrams.  First, let’s consider how man tries to interpret and make sense of everything taking place around us.

In a man-centered worldview, human reasoning becomes the answer to all of man’s problems.  Man becomes autonomous and, therefore, determines what is right and wrong.  However, this leads to chaos because there cannot be any absolute moral standards by which one lives his/her life.  Everything is subjective and relative.

Man will decide what is moral.  He, alone, will make laws, interpret history, establish government and even try to define “God.”  This is why we find ourselves in such a mess today.  Even Christians are looking to man for the answers to life’s problems. 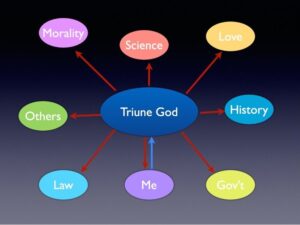 On the other hand, a biblical worldview puts God at the center of everything.  God is the One who, not only created life, but orders it.  This option is depicted by a similar diagram.  Instead of man defining all of life, God does it.  God’s character defines morality.  He determines the role of government and He is the basis for law and justice.

In order for me to understand myself and all of life, I must do so by looking at everything through God.  God not only tells me who man is but He is also the only One who can give me a true perspective of everything taking place in the world around me.

The problem is that Christians too often try to live their lives by attempting to be autonomous and depending on God at the same time.  We do this by adding man’s opinions to what God says about certain areas of life.

This was a problem that Jesus saw with the religious leaders of His day.  In Matthew 15, we find these words.

Then the scribes and Pharisees who were from Jerusalem came to Jesus, saying, “Why do Your disciples transgress the tradition of the elders? For they do not wash their hands when they eat bread.” Matthew 15:1-2 (NKJV)

In response to their question, Jesus turns them on their heads by saying,

Why do you also transgress the commandment of God because of your tradition? Matthew 15:3 (NKJV)

When we live from a man-centered worldview, we end up going against God’s Word.

As I read this, I realized that the Pharisees and scribes were interpreting life through human opinion.  Jesus told them that going by human reasoning caused them to go against God’s commandments.  When we live from a man-centered worldview, we also end up going against God’s Word.  In fact, Jesus used some very strong language to get this truth across to these religious leaders.

Thus you have made the commandment of God of no effect by your tradition.  Matthew 15:6 (NKJV)

One translation puts it this way.  By this you invalidated the Word of God for the sake of your tradition.  It is dangerous and disastrous to try and mix man’s opinions with God’s Word in an effort to interpret any aspect of our lives.  When we do this, we end up teaching as doctrines the commandments of men (Matthew 15:9).

Jesus furthered explained that when this happens, we become hypocrites and end up honoring Him with our lips but not with our hearts.  This is something that I have to continually wrestle with in my own life.

It is dangerous to try and mix man’s opinions with Gods Word in order to interpret life. When we do this, we end up teaching as doctrines the commandments of men.

It is also something that I see happing in the church today.  We do this when we think that we need to study what the world is saying about certain things in order to know how we should respond.  I have seen Christian leaders recommend books, messages, etc. that are not based on Scripture in order to know what we should do.  Christian schools can be guilty of this when they think that they have to turn to secular worldview textbooks as their primary sources in their subject areas.

These trends are only leading us into greater confusion and not providing the real solutions to the chaos and division that are tearing us apart.  This may be controversial to say but I am more convicted than ever before that it is time for the body of Christ to cling to the sufficiency of Scripture!

What I really need to do is study God’s Word more. It is only through knowing God by studying His Word will I know how to live a life that glorifies God.

I don’t need to read books such as White Fragility or study Critical Theory or turn to secular textbooks or make researched-based decisions in order to understand what is happening in the world.  What I really need to do is study God’s Word more.  It is only through knowing God by studying His Word will I know how to live a life that glorifies God.

As you study the two diagrams above, which one best defines how you live your life, raise your children, educate your students and address the cultural issues facing you today?  Do you spend more time reading books written by men from a secular worldview or digging deep into God’s Word?  Are you making decisions based on research, news reports, various movements or what God’s Word says?  Do you believe God’s Word to be not only true but totally sufficient?

God’s Word is sufficient to show us the solution to any problem we face in the world today.  I must know His Word in order to find the solution!