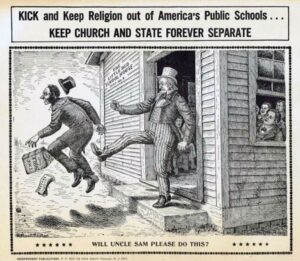 Several years ago, I attended a youth pastor’s event in Orlando, Florida that was conducted by Dr. Jay Strack. At the conference, Josh McDowell challenged us in the opening keynote address. Josh said something that caused me to pay closer attention to the culture we were living in at the time.

McDowell went on to tell these church leaders that we were living in an anti-Christian culture. The culture no longer tolerated Christianity; it was now hostile toward and attacked the basic beliefs of the faith. You have to keep in mind that this conference took place more than 15 years ago.

I realized that many Christians my age were longing to go back to what our country was like in the 1950s and 1960s — thinking that those were the days when the culture was Judeo-Christian in nature and supported our Christian faith. As I contemplated the truth of what Josh was sharing, I understood that, while growing up in the 50s and 60s, the culture was already post-Christian.

It is true that we were allowed to pray in school and we weren’t hindered in anyway from attending church and talking about spiritual things in public. Yet, society only tolerated our faith; it no longer supported it.

The signs of what it is like to live in an anti-Christian culture were just beginning to show up. Fast forward to now and there should not be any doubt in anyone’s mind that today’s culture attacks any effort to bring biblical values into the public arena. This is especially true when it comes to how we educate our children and youth.

Secular education, whether in public or private schools, will not tolerate biblical values. This means that any attempt to bring truth into the classroom will be viciously attacked. This hostility toward Christianity has been on full display over the past few weeks. I have written about some examples of this hostility such as Disney’s effort to infuse LGBTQ characters and other efforts to sexualize children and youth in all that they do.

This hatred toward Christianity (I know that this is a harsh statement) showed up in full force on my computer screen this past week. Consider the following:

In the Pennsylvania example, it must be noted that when parents complained to the school, it was discovered that this event had been taking place for the past 3 years. The teacher who had sponsored the drag show posted this,

I don’t know how to explain the sheer joy i feel in my bones when these queens come take time out of their busy schedules to perform for us (year 3!) and to be with my students. as GSA co-advisor and a queer teacher, it makes me emotional to think of this space we have created– I would have loved nothing more than to have a space like they have, an opportunity to attend their own drag show…and to have these beautiful role models to support them. to model kindness. acceptance. perseverance. confidence. community. my closeted high school self finds so much healing in days like this. we all want permission to be ourselves. for some of us, we have to be the ones to celebrate ourselves. days like today are my why. je vous aime tous (I love you all).

It is somewhat encouraging to know that the school has suspended this teacher. However, it must be noted that the teacher was not dismissed. Unfortunately, parents will think that the problem has been taken care of with the suspension of the teacher. What should be of greater concern was that this type of activity had taken place for three years and nothing was done about it until a parent complained. This shows that there is a dangerous philosophy of education that has taken hold in the school that will continue to drive every one of its educational efforts in the future.

You may be thinking that this should be expected in a secular society but we are “safe” in our Christian school. An anti-Christian culture won’t limit its attack on Christianity to the public square. A case in point is taken from a news report in Kentucky. This news report targeted a Christian school in the area due to a leaked homework assignment.

A middle school assignment in a Bible class asked students to write a letter to a friend who is struggling with homosexuality. In this worldview class the students were to share truth with them that “God’s design for them is good,” “that homosexuality will not bring satisfaction,” and “that you love them even though you don’t approve of their lifestyle.”

A local businessman, who identifies as gay, was given screen shots of the assignment from a “close friend who has a child attending the school.” So, he posted this and said he received over 1,000 messages about this — including some from supposedly current parents at the school and school alums who all voiced concern over the assignment.

The school gave a biblical response when contacted by the news station. However, the report ended with a quote from an alumna of the school who “was angry about the assignment” and a final statement by the businessman.

They’re a private school they can do what they want. They have a board, they create their own values. Parents decide where their kids go to school. I would only say is I didn’t feel like I had a voice in 7th grade either when I was being forced to attend schools that I didn’t have a say. These kids should have a voice. (emphasis mine)

I am reading through the book of Job in my daily devotions and I came across a passage that describes the mindset that we face in today’s culture.

Yet they say to God, ‘Depart from us, for we do not desire the knowledge of Your ways. Who is the Almighty, that we should serve Him? And what profit do we have if we pray to Him?’ Job 21:14-15 (NKJV)

It is not easy to serve God in today’s culture. It is going to take courage and boldness to stand firm in the faith. We must be grounded in the truth of Scripture if we are going to survive the attacks that will definitely come our way. Christian schools must know and embrace a biblical philosophy of education (Kingdom Education™) in order to stay true to God’s purpose for their existence. We must pray for each other like never before.

I pray that you will consider joining me at one of the upcoming Kingdom Education™ Summits, where we will develop strategies for our homes, churches and schools in order to equip the next generation to serve God in an anti-Christian world. I urge you to register your school today!