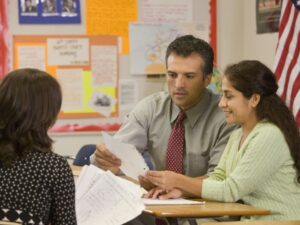 This past week there was another attack on the family. I have written about Satan’s strategy to destroy the family in some of my recent blogs. We must never forget that God designed and defined the family as a husband and wife who have children if He so allows.

It has always been the belief of Christians that children are gifts from the Lord to parents. Throughout Scripture parents are given the responsibility to raise their children in the nurture and admonition of the Lord. The first biblical principle of Kingdom Education™ states that the education of children and youth is the primary responsibility of parents.

Over the past several decades there has been an ever-increasing effort to move this responsibility from parents to the state. Hillary Clinton stressed this years ago when she emphasized the statement that it takes a village to raise a child. During last year’s gubernatorial race in Virginia, one candidate stated that parents should not have a voice in what children are taught in school. I could go on and on with other examples of this belief that children belong to communities (the state), not to parents.

In a speech to public school educators this past week, President Biden alluded to the belief that the state has some ownership of children. Here is what he said.

You’ve heard me say it many times about our children, but its true: They’re all our children. And the reason you’re the Teachers of the Year is because you recognize that. They’re not somebody else’s children; they’re like yours when they’re in the classroom. (emphasis mine)

There is no doubt about it. This attack on the family, especially for the right to teach children and youth, will increase in the coming days, months and years. Many parents have started to realize the dangerous ideologies that the state has melded into the curriculum over the past several decades. The number of parents who have started to home school their children has skyrocketed in the past 2-3 years. Christian schools have also seen their enrollments climb during this same period of time.

Christian schools have always maintained that they partner with parents in providing the children with a Christian education. However, there seems to be a growing disconnect between the home and school when it comes to this partnership.

Sometimes parent involvement is equated with partnering together in giving children a biblical education. However, mere involvement is not enough. There must be a commitment by both parents and Christian educators to a biblical philosophy of education, Kingdom Education™, for a true partnership to take place.

Christian schools have always maintained that they partner with parents in providing children with a Christian education.

The Cultural Research Center (CRC) at Arizona Christian University just released its findings from a major study of parents’ worldviews. Dr. Tracy Munsil, Executive Director of the CRC, summarized the study with this shocking statement.

Today’s parents of preteens are in the midst of a spiritual crisis — a crisis of worldview and faith so deep that a tragic crash looms on the horizon when it comes to how parents are raising the next generation.

These findings are reported in the American Worldview Inventory 2022 that was conducted under the direction of veteran worldview researcher Dr. George Barna. Munsil explains the basis for this crisis of worldview this way.

Today’s preteens (up to age 13) are confused by the contradiction between their parents’ actions and lifestyles and their self-identified Christian beliefs. In fact, the AWVI 2022 identified a staggering disparity between the number of parents who claim to be Christian (67%) and those who actually possess a biblical worldview (2%).

Even though one finds parents present on school campuses, there is little evidence that this translates into the partnership needed to give children a biblical worldview education.

It must also be pointed out that this worldview crisis does not only exist among parents but also among all Christian adults, including teachers in Christian schools. Every Christian school that I have worked with over the years has stated that they believe parents have the God-given responsibility to educate their children biblically. They also state that the school exists to assist the parents in fulfilling this awesome responsibility.

Even though one finds parents at many school activities, volunteering in a wide range of things, and present on school campuses on a daily basis, there is little evidence that this involvement translates into the partnership needed to effectively give students a biblical worldview education.

I have had the privilege of conducting several parent seminars at different Christian schools over the past few months. In each case I have found the parents to be fully engaged in what God expects of the home and school when it comes to how He wants children and youth to be educated.

However, I have walked away from these events with mixed emotions. It has been rewarding to see parents committed to the biblical principles of Kingdom Education™. However, it has been concerning to realize that only 10-20% of parents, who have enrolled their children in these schools, attended these seminars.

I have frequently heard school administrators voice their concern over the lack of understanding that parents have about Kingdom Education™. However, there doesn’t seem to be a plan to make sure parents not only know the principles of Kingdom Education™ but also embrace them in their homes.

With the increased attack on the family and the growing belief that children belong to whole communities, we must develop strategies to help parents understand their God-given responsibility to educate their children biblically. In addition to helping them understand this responsibility, they must also be equipped to begin this process in their homes and, then, partner with like-minded Christian schools.

I have always wanted to help Christians understand Kingdom Education™. However, when God led me to establish Kingdom Education™ Ministries in 2014, He made it clear to me that this had to be my major focus. It isn’t that I am not interested in equipping educators in good instructional strategies or identifying the best practices when it comes to teaching and learning.

In addition to helping parents understand their God-given responsibility, they must be equipped to begin this process in their homes and, then, partner with like-minded Christian schools.

I am asking God to bring together school leaders, teachers, parents and pastors so that we can address the issue of education biblically and be fully equipped to combat the ever-increasing attack on our families. I trust you will prayerfully consider joining me at one of this summer’s Kingdom Education™ Summits. The partnership between the school and the home must be a reality and not simply a statement in our handbooks.