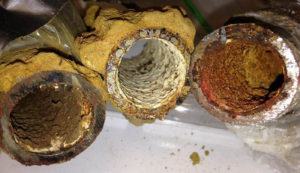 We have been looking at what happened when one city decided to change its source from where it was getting its water.  I want to remind you that the main reason why the city of Flint, Michigan wanted to change from getting its water from Detroit was to same money.  If they would use the water that was right there in their backyard, they would save approximately $5 million.  However, the contaminated water that came from the new source would cost much more than what they had hoped to save.  After a mere 18 months of using the contaminated water, the cost of such a disastrous decision was and is still rising. Consider the following:

The alarming thing about all of this is the fact that these costs are the result of the city of Flint attempting to save between $5 and $12 million dollars in water costs.  In March of 2018 it was reported that the state of Michigan was still spending more than $22,000 a day on bottled water for Flint residents.

The decision for Flint, Michigan to switch its water supply resulted in one cost that was much more devastating than the economic impact it had.  Changing to contaminated water led to the loss of human life.  Even though the official death toll was 19, the actual death toll was probably much higher.  Studies showed that pneumonia deaths rose 74% during the 6-month period after the water supply was switched.

The cost that that has resulted from Christians changing the source from which their children would receive their education has been catastrophic.  It is almost impossible to calculate the costs that have resulted from Americans switching to a secular source of education for their children and youth.  Christians have led their children to drink from a secular education system with contaminated water for many decades now.  The poisoning of children and youth has gone on for several generations and the degree of corrosion in today’s culture is almost impossible to comprehend or even imagine. The home, church and school have all been compromised and weakened.

One high cost to drinking from a contaminated educational system is that Christianity has been privatized and is limited to performing a series of programs on Sundays, Wednesday nights and various special events such as VBS, women’s and men’s conferences, etc. Christianity is allowed to operate in the home and church but is being forced out of the public square.  At the same time society has become totally secular where God is simply ignored, denied and/or even attacked.

The secularization of society and many Christian homes continues to carry with it high costs.  Consider the following:

The poisoning of our children and youth has also carried with it the cost of human life.

I believe the most disastrous cost that we have encountered has been eternal in nature.  Studies show that between 65% and 80% of teens in church today will walk away from their faith within two years of high school graduation.  More and more “Christians” say that the Bible contains errors, evolution is a scientific fact, and that Jesus committed sin while here on earth.  Christian Smith in his study of religion in North America found that many young people are moralistic, therapeutic deists where God only gets involved in one’s life in order to solve one’s problems and make him/her happy.

These are just some of the devastating costs that our society has encountered from drinking from a contaminated educational system.  Of course, God warned His people that this is what would happen if they continued to forsake Him, the fountain of living waters, and go to the world to drink of its waters of knowledge and wisdom (see Jeremiah 2:13, 18).  In fact, God made it clear that choosing to “drink” from the world’s water would become their own discipline.

Your own wickedness will correct you, and your apostasies will reprove you;
Know therefore and see that it is evil and bitter for you to forsake the Lord your God,
And the dread [fear] of Me is not in you,” declares the Lord God of hosts. Jeremiah 2:19 (NASB)

What is the solution to these horrific results that come from drinking from the contaminated waters of a secular education?  The only solution that can reverse these trends is for Christians to return to the “fountain of living waters.”  The costs to change back to the original source of living water, God, seem too high for anyone to afford.  One of the reasons for this is the fact that the poison water of secular education has taken the average Christian home deep into debt because of the desire to consume more and more stuff.  At the same time, only a small percentage of Christians have stayed true to God’s economic system whereby God is given the first tenth of one’s increase and then, he/she uses the other 90% as good stewards of God’s provision to advance His kingdom.

Even if the home and church were to unite immediately and give their children a biblical worldview education, the results would not be seen in the immediate future.  The reason for this is that Christianity’s infrastructure has become corroded over decades of contaminated water pouring through it.  Parents and church leaders must renew their own minds and develop a biblical worldview before they are going to be able to give this to their children.  Churches must also help young adults, who have developed a secular worldview or have compartmentalized their lives and formed a secular/sacred divide, flush out their corroded thinking and develop the ability to think and act from a biblical worldview.

The poisoning of our children and youth has been taking place for decades.  It will take several years to fully reverse this trend.  However, we have reached a crisis point where if we don’t take action now, it might become impossible to do so in the future.