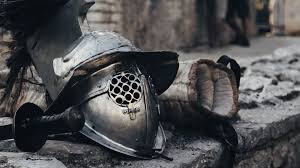 What fights have you been involved in over the past month, week or day?  Have you had any battles at home, work, school or even church?  It seems like we are always fighting something or someone.

The Apostle Paul understood the reality of fighting battles on a daily basis.  When Paul realized that his time on earth was coming to an end, he wrote to his young son in the faith.  He summed up his life and ministry when he penned these words.

For I am now ready to be offered, and the time of my departure is at hand.  I have fought a good fight, I have finished my course, I have kept the faith: Henceforth there is laid up for me a crown of righteousness, which the Lord, the righteous judge, shall give me at that day: and not to me only, but unto all them also that love his appearing.  2 Timothy 4:6-8 (KJV)

This week I want to share with you what God has been laying on my heart about Paul’s statement — I have fought a good fight.

Think of all the fights you and I can choose to enter and are probably engaged in right now.  There are family matters that we fight about.  There are work related fights we face.  There are battles that we encounter with students and their parents.  Of course, we are all aware of the heated political fights that are in the news headlines on a daily basis.

The most important fight that I am confronted with every day is an internal one. It is the fight over what or who is controlling my mind.

One can argue that there are a lot of “good” causes that we need to fight about.  But when it comes to choosing the fights that we will enter into, what is the good fight  that Paul is talking about?

As I have been studying this issue and trying to discern what is the good fight, I have come to the conclusion that it is not an outward fight.  The most important fight that I am confronted with every day is an internal one.  It is the fight over what or who is controlling my mind.

My biggest battle is the one that determines what I think and believe about all areas of life.  It is a spiritual battle that I must engage in from the moment I open my eyes in the morning until I close them at the end of the day.  It is a cosmic battle of worldviews that takes place right inside my own life.

I recently read something during my morning quiet time that jumped off the page and has been front and center in my mind ever since.  These words were in a daily devotional guide by Billy Graham.  The entry for January 27 was titled, Above the Din.  It was based on Philippians 2:5 that reads, Let this mind be in you which was also in Christ Jesus.

Think about what Graham said when he wrote,

The world…is engaged in a gigantic brainwashing…The world’s sewage system threatens to contaminate the stream of Christian thought (emphasis mine).

Is the world shaping your mind – or is Christ?

Being involved in education for so many years, I would take these truths and apply them to what the world is trying to do to other people — especially our children and youth.  Therefore, I believed that the good fight was for the hearts and minds of the next generation.

However, God impressed on my heart that the real battle was for my heart and mind.  The world’s sewage system wants to contaminate my stream of Christian thought.  The devotional ended by asking a penetrating question.  Is the world shaping your mind — or is Christ?

Ever since I read this a couple of weeks ago, I have been engaged in some serious battles.  I found myself trying to shift this question away from myself.  It went something like this.

This is when God laid a heavy burden on my heart.  It was as if God was asking me a question I wasn’t prepared to answer.  How can I help someone else successfully engage in the battle for his/her mind if I didn’t see my own mind as a battlefield?

It has become clear to me that if I want to be successful in a lot of important fights in life, I must first make sure that the battle for my mind is being won by Christ.  If that happens, and only when that happens, will I be prepared to fight other fights.

2 Corinthians 10:5 has taken on new meaning for me.  I must be diligent in fighting the good fight.  Every one of my thoughts must either honor Christ or be taken captive until it does!

When the war for my mind is won, it will impact every other fight that I am confronted with.  It will affect how I fight about family issues.  It influences how I fight over political matters.  It gives me the wisdom to know how to face the fights that take place in my work/ministry.  It definitely determines how successful I can be when fighting for the hearts and minds of future generations.

Every one of my thoughts must either honor Christ or be taken captive until it does!