The Disastrous Consequences of Dualism 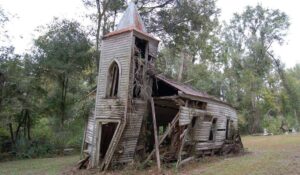 The Decay of Christianity

We are living in a world that is spinning out of control.  There seems to be no absolute guidelines that determine right and wrong.  Even Christians seem to be floundering in a sea of uncertainty.  Last week I shared how many Christians have developed a dualistic belief system where life is divided into two compartments — the secular and the sacred.

Unfortunately, the consequences of trying to live a dualistic life go unnoticed but they are disastrous in a couple of ways.  One of these consequences has to do with our personal lives.

In his book, The Rest of Your Life, Patrick Morley tells the story of a man who had succumbed to dualism.  In this account, the man knew that,

…he had stopped growing spiritually long ago. He had completely separated his faith from his work and social life. All in all, Christianity was still privately engaging to him but an irrelevant factor in his day-to-day world.

Whenever one attempts to live his/her life by two different worldview, he/she finds that life cannot have any overarching purpose.  Life is fragmented with no cohesive belief system to bring meaning and purpose to one’s existence.  Without God and truth, there is no one or thing that one can turn to for meaning and purpose.

When one attempts to live his life by two different worldview, he finds that life cannot have any overarching purpose. Life is fragmented with no cohesive belief system to bring meaning and purpose to one’s existence.

The reason why this disastrous consequence will always be a result of dualism is simple.  The beliefs of a secular worldview and those of a biblical one are in total opposition to one another.  As Morley points out,

They are radically different and opposite systems of how to approach life, meaning, reality, values, ethics, justice, relationships, eternity, God, and man.  As systems, they have no points in common and a wall of ideology separates them.

James understood this when, under the inspiration of the Holy Spirit, he wrote,

If any of you lacks wisdom, let him ask of God…But let him ask in faith, with no doubting, for he who doubts is like a wave of the sea driven and tossed by the wind. For let not that man suppose that he will receive anything from the Lord; he is a double-minded man, unstable in all his ways.  James 1:5-8 (NKJV)

When a majority of Christians divide their lives up into the secular and sacred departments, Christianity loses its power.

When a person does not believe that God’s Word should control all of one’s life, that person is double-minded.  Consequently, a double-minded person is unstable in ALL his ways, not just in some ways.  This is because when one’s interests are divided, one’s heart also becomes divided.

The second consequence that results when a Christian tries to live a dualistic life is even more disastrous.  This is because dualism in one’s life will be reflected in one’s religion.  When a majority of Christians divide their lives up into the secular and sacred compartments, Christianity loses its power.

Morley, once again, brings this to light when he writes,

The choices we make brand us; we are the sum of our decisions…Everyone’s life makes a statement about what is important to him…for many Christians the statement is this:  My Christianity doesn’t work.

Why is this true?  It is because, no matter how hard one tries, one cannot completely separate two opposing worldviews.  Unfortunately, the secular worldview will always influence a biblical worldview.  It has been long understood that a major problem in western Christianity is symbolized by the word “syncretism.”

The dictionary defines syncretism as the attempt or tendency to combine or reconcile differing philosophical or religious beliefs.  It is trying to have the best of two worlds – the secular and the sacred.  In reality, many Christians today have tried to develop a form of Christianity by blending in beliefs and values from other religions.

Again, God’s Word warns us about the danger of this type of worship.  He constantly warned the Israelites not to “intermarry” with the people around them.  The reason for this was because He knew that it would lead to dualism and pollute their worship.

The Lord had said to the children of Israel, “You shall not intermarry with them, nor they with you. Surely they will turn away your hearts after their gods.  1 Kings 11:2 (NKJV)

But they mingled with the Gentiles and learned their works; they served their idols, which became a snare to them.  Psalm 106:35-36 (NKJV)

We are reaping the consequences that are a result of decades of sowing a dualistic worldview into generations of young people.  A growing number of Christians are frustrated by dysfunctional lives that lack significant meaning and purpose.  Young people are walking away from Christianity because when they look at adults they see their lives telling them, My Christianity Doesn’t Work!

Everyone’s life makes a statement about what is important to him…for many Christians the statement is this: My Christianity doesn’t work.

We must destroy dualism in our lives before it is too late.  Every remnant of cultural Christianity must be eradicated completely by the complete renewing of one’s mind where every thought is brought into captivity of Christ or the Word.

Stay tuned there is more to come next week when I will ask some questions to see whether or not we are infected with the virus of dualism.