What Language Will Future Generations Speak? 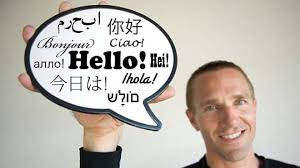 When you read the title of this week’s blog, you might have thought that this is a very easy question to answer.  You probably thought that your children will speak the language of the country in which they live.

Someone who was born and raised in Germany would most likely speak German as this would be his/her native tongue.  People living in France would speak French and those of us living in the United States would speak English.

It is also true that many young people learn to, not only, speak their native language, but also, another foreign language.  Here in the United States, Spanish seems to be the most common foreign language taught in most schools.

However, I am talking about something entirely different when I ask the question, What language will future generations speak?  I was reading through Nehemiah in my quiet time recently when I came across an interesting couple of verses.  In chapter 13 of this book, we find these words,

Whenever the Israelites intermarried with the culture, one finds that they eventually worshipped the false gods of the culture into which they married.

Nehemiah was grieved to learn that some of the Jews had intermarried with the people of Ashdod, Ammon and Moab.  This is something that God had forbidden His people to do.  Nehemiah also saw that the result of this practice was that their children could not speak the language of Judah.

It must be noted that the reason why God warned against this is because it was a picture of God’s people intermarrying with the culture and not remaining pure in their worship of Him.  Whenever the Israelites intermarried with the culture, one finds that they eventually worshipped the false gods of the culture into which they married.

As I read this, I realized that every belief system or worldview has its own language.  I have written in other posts that there are really only two possible worldviews that one can adopt — a God-centered worldview or a man-centered one.

The beliefs, values and assumptions of one’s worldview make up the language that an individual speaks.  That language is most clearly seen and understood by the lifestyle one takes on.  This is what had happened in Nehemiah’s day.

The children of these Jews who had intermarried with the culture around them had developed a completely different belief system from that of Judah.  They didn’t even understand the worldview of Judah.

So the real question we must ask ourselves today is this.  Will our children and grandchildren speak a biblical worldview language or a secular one?

This question is answered by looking at the type of education we are giving them.  The reason why this is so important is that all education is taught within the context of a worldview.  Therefore, the education our children and grandchildren receive will determine what worldview language they will speak or live.

We find an example of this in the book of Daniel.  The Israelites had been taken into captivity by the pagan king of Babylon.  King Nebuchadnezzar chose the brightest of the Israelite young men and put them through a 3-year educational program.

Then the king instructed Ashpenaz…to bring some of the children of Israel…young men in whom there was no blemish, but good-looking, gifted in all wisdom, possessing knowledge and quick to understand…whom they might teach the language and literature of the Chaldeans. And the king appointed for them…three years of training for them, so that at the end of that time they might serve before the king.  Daniel 1:3-5 (NKJV)

The king changed their names to Babylonian ones, taught them the language of the Chaldeans and educated them so that they would serve Babylon, not Israel.  One commentator notes that this was an intensive educational effort to erase any remembrance of their Israelite heritage from their minds.

Every educational system desires to teach its students the language of its worldview or belief system. The goal is to make sure that the young people are fit to serve their “god” or “gods”.

Fortunately, Daniel and his friends had been given a strong biblical education prior to being taken into captivity.  We find that they did not forget the language of Judah.

This same motive is behind every educational system in existence today.  Each system desires to teach its students the language of its worldview or belief system.  The goal is to make sure that the young people are fit to serve their “god” or “gods”.

If the next generation is to speak or live a biblical lifestyle, they must be given a biblical worldview education at home, church and school.

The answer to the question asked in the title will be determined by what worldview system of education will teach them.  If the next generation is to speak or live a biblical lifestyle, they must be given a biblical worldview education at home, church and school.

If they receive a secular education, they most likely will speak or live a secular lifestyle.  If this happens, we will find ourselves grieved like Nehemiah was because our children will not be able to speak the language of Christianity!