My Response To Today’s Turmoil 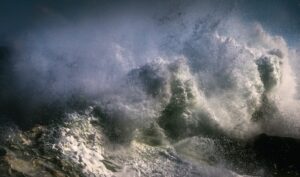 First, we faced a nationwide lockdown due to COVID-19.  Then, the country exploded in protests and riots because of the senseless death of a man.  We are sitting on a powder keg that is ready to explode.  What is the answer to all of this?

I have resisted the temptation to speak about the issues facing us today as I, too, have struggled to make sense out of all of it.  There are so many voices shouting their feelings from every position imaginable.  It is my prayer that I will avoid sharing my opinions but try to approach things from a biblical perspective.

The protests, looting and rioting that are taking place all across the country are said to be reactions to the death of a man named George Floyd.  Anyone that viewed the heart-wrenching video that showed this man’s breath literally being choked out of him must condemn the actions of the men involved in his arrest.

My heart was broken by Mr. Floyd’s death and I long for justice to be served.  However, I am not grieved by this in the same manner as many others are.  Cries of racism, white supremacy, white privilege, black lives matter and police brutality have become the common narratives surrounding this senseless death.

As Christians, we must find our identity and view the identity of each and every other person through the doctrine of imago Dei.

What grieves my heart is that a person who was created in the image of God lost his life because another human being unnecessarily caused his death.  I am equally grieved to see another image bearer of God kicked in the head by a protestor that led to his death.  The same is true when I learned that a man working to secure a business lost his life.  Grief also gripped me when I read the account of a police officer being shot in the back of the head at point blank range while doing his job of protecting people and property.

In addition to each of the travesties, I am appalled by the murder of over 2,000 babies each day and over 700,000 each year here in the United States.  Every abortion destroys the life of an innocent image bearer of God.

Please note that I didn’t identify any of these victims by the color of his/her skin but as individuals who were each created in the image of God.  Whenever the ethnicity of a person is interjected into injury or loss of life, it seems like others justify injuring or killing of other people, as well as destroying private property.

The worth and value of every human being is found in the truth that each and every person has been, is and always will be created in the image of God.

The death of George Floyd was not tragic and horrific because a white police officer acted in a certain way towards a black man.  The same is true for the other deaths that I have mentioned.  It doesn’t matter what the color of skin the victims or the perpetrators were.  The worth and value of every human being is found in the truth that each and every person has been, is and always will be created in the image of God.  We know this to be true when we read the following passages in God’s Word.

Then God said, Let Us make man in Our image, according to Our likeness…So God created man in His own image; in the image of God He created him; male and female He created them…And the Lord God formed man of the dust of the ground, and breathed into his nostrils the breath of life; and man became a living being.  Genesis 1:26-27; 2:7 (NKJV)

Because man is created in the image of God, God says that the shedding of innocent blood is sinful.

Whoever sheds man’s blood, by man his blood shall be shed; For in the image of God He made man.  Genesis 9:6 (NKJV)

We have abandoned the teaching of creation and that man was created in the image of God, imago Dei.  When one denies the existence of God, then man is merely a result of evolutionary time and chance.  Instead of one race there must be many races as various people groups evolved differently over billions of years.  One person puts it this way.

Atheistic and evolutionary worldviews teach us that events are random, our origins accidental, our lives meaningless, and tragedy inevitable. Those who close their eyes to the one true God remain blind to His divine plans and purposes.  Cameron Buettel

The evolutionary belief that there are many races is not biblical.  Therefore, trying to improve race relations, which reflects evolutionary thinking, is impossible.  Darryl Harrison states,

The term “race relations” is a misnomer. God created you and me to relate to one another by way of hearts and minds, not skin color. Melanin is passive—it cannot love or hate—but our hearts can—and do. Biblically, murder is an attitude before it is an act (1 John 2:9-11; 3:15).

I am concerned when I see and/or hear Christian leaders addressing these very real issues framed through secular ideas such as critical race theory, white privilege (or any other form of privilege), etc.  We must evaluate everything through the lens of Scripture.

God’s Word is totally sufficient to guide us into how to better “love our neighbor as ourselves.”  Recently, I saw several social media posts that gave the appearance that some church leaders are supporting the concept of “privilege”.  Here are some of the statements I have seen.

White privilege exists as a direct result of both historic and enduring racism, biases, and practices designed to oppress people of color.

White privilege doesn’t mean your life hasn’t been hard.  It means your skin tone isn’t one of the things making it harder!  There’s plenty of other privileges (socio-economic, male, heterosexual cisgender, Christian, able-bodied)  but white privilege is perhaps the most enduring throughout history.

You’ve never been judged by the color of your skin. (A statement to a white person)

If you consider these statements, you will find that they contradict themselves.  For example, if someone tells me that I will never be judged by the color of my skin, that person has just judged me based on my skin color.

The entire concept that someone has “privilege” because of his/her skin color or gender goes against Scripture.  If God has created me in His image (which He has), then He chose my gender and skin color.  I had nothing to do with it whatsoever.

If either of these traits cause me to be privileged, then God created me that way.  Of course, that means that I must reject Acts 10:34 when Peter preached,

Then Peter opened his mouth, and said, of a truth I perceive that God is no respecter of persons…

The same would be true about what James said when he wrote that not treating everyone the same is sin (James 3:9).

All injustices that anyone commits are the result of sin. It is not an attitudinal or social condition. It is a heart condition.

In order to understand the senseless taking of human life, destruction of private property and the violence that we are witnessing on a daily basis, we must trace this back to its origin.  To do this, it is not sufficient to simply go back to times of slavery or to the founding of our country; which is what is commonly being done by many today.

We must go back to Genesis 3 where we find sin entering the world through the Fall of man.  In fact, the first murder that was ever recorded was committed by Cain who murdered his own brother, Abel.  “Race” played no part in this evil act.

So, what is the solution to all of this?  The words of G. K. Chesterton come to my mind when trying to answer this question.

We must first see that the problem is spiritual and is found in the depravity of the human heart.

The heart [is] deceitful above all [things], and desperately wicked: who can know it?  Jeremiah 17:9 (NKJV)

Keep thy heart with all diligence; for out of it [are] the issues of life. Proverbs 4:23 (NKJV)

For from within, out of the heart of man, come evil thoughts, sexual immorality, theft, murder, adultery, coveting, wickedness, deceit, sensuality, envy, slander, pride, foolishness. All these evil things come from within, and they defile a person.” Mark 7:21-23 (NKJV)

Once we accurately identify the problem, we can then try to find the solution.  Trying to reform a person or an organization can’t solve these problems.  We must have a heart change.  This can only be found in Jesus and the Gospel.

To biblically address the upheaval in society today is challenging because we have all been influenced by decades of secular education and thinking.  God’s existence has been ignored or, even worse, denied.  Because of this, we have raised several generations of people who do not think biblically.

Christians have conformed to the world’s way of thinking when trying to address these important life issues and we find ourselves in turmoil.

Therefore, they do not know that every person has value and worth because each one was created in the image of God.  As a result, Christians have conformed to the world’s way of thinking when trying to address these important life issues and we find ourselves in turmoil.  Dr. Albert Mohler stated the following in one of his recent episodes of The Briefing.

When you deny the creation order as God has given it to us for our good and His glory, you get chaos at every turn.

We must develop a biblical worldview and, then, give our children and youth a biblical worldview education.  Without this taking place the sanctity of human life will continue to disappear from society and chaos will become more and more rampant.  Consider the words of A.W. Tozer.

When the knowledge of God began to go out of the minds of men, we got into the fix that we’re in now [Romans 1].

In whom or what are you trying to find your identity?  As Christians, we must find our identity and view the identity of each and every other person through the doctrine of imago Dei.  Then, we must identify with only one person, Jesus Christ.  I leave you with the words of pastor, Virgil “Omaha” Walker.  His challenge applies to every Christian, whether or not one is a pastor and regardless of the color of one’s skin.

Father, may I see every person as someone You created in Your image. Show me how to love my neighbor as I love myself.  May my life reflect Jesus no matter what circumstances I find myself in.  Bring healing and peace to our homes, churches, communities and country.  Do this for Your glory!  In Jesus name, amen.