The Myth of Neutrality 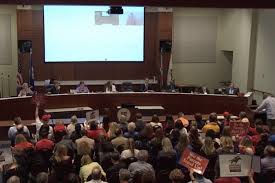 I continue to be amazed at the number of parents, church leaders and educators who hold the view that education, especially schooling, can be neutral. Even if a teacher attempts to teach math as a body of neutral facts, such as 2+2=4, this would not be teaching that is value free. In fact, it might be the most dangerous type of teaching that can be thrust upon a student. By trying to teach any subject neutrally tells students that God is irrelevant to that subject.

I read two articles this past week that were clear demonstrations on how schooling is becoming more and more dangerous when it comes to indoctrination of students. Both of these articles clearly showed how today’s educational system has become a threat to parents who believe that they should have a say in what their children are being taught in school.

The first article covered a debate that took place between the two candidates for governor in the state of Virginia. One candidate made the following statement.

You believe school systems should tell children what to do. I believe parents should be in charge of their kids’ education.

The other candidate responded with this statement.

I’m not going to let parents come into schools and actually take books out and make their own decisions. I don’t think parents should be telling schools what they should teach.

In case you might be thinking that this was simply political rhetoric, this candidate was asked later about his statement. His stance on who needs to be in control of what values and beliefs a child should be taught was quite clear.

I don’t think parents should be telling schools what they should teach.

Of course, much of these types of public statements are being made in response to parents who are becoming increasingly concerned with what ideologies are being taught in their local schools. More and more parents are realizing that schools are teaching students what to think rather than how to think.

When parents become aware of such dangerous teaching, they are going to school board meetings to make their concerns known. One would think that school boards and educators would welcome parents becoming involved in their children’s education. At least, that is what they say they want.

However, as these parents are standing up against the indoctrination taking place, instead of being welcomed, they find themselves being silenced and even required to leave. Parents can be involved in their child’s schooling as long as this involvement doesn’t interfere with the dangerous philosophies that are being taught.

After reading the statements by the gubernatorial candidate in Virginia, I read another editorial by Dr. Everett Piper in the Washington Times. In his editorial, Piper references a letter that the National School Boards Association recently sent to President Joe Biden. Piper wrote that the letter was “to warn the President that our nation’s schools are under the imminent threat of ‘domestic terrorism.'”

What is this threat of domestic terrorism? The letter states,

…public school officials are facing physical threats because of propaganda purporting the false inclusion of critical race theory within classroom instruction and curricula…The classification of these heinous actions could be the equivalent to a form of domestic terrorism…As such, NSBA requests a joint expedited review by the U.S. Departments of Justice, Education, and Homeland Security, along with the..FBI…

Wow! I have seen social media posts of parents attending local school board meetings denouncing the dangerous and destructive ideologies being taught to their children. The presentations have been bold and forceful. Some of these “protests” have actually read pornographic material to these board members that were right out of the textbooks they had approved.

Instead of thanking these parents for bringing these matters to their attention, they are now being reported to the President of the United States and labeled as domestic terrorists. This is extremely dangerous when elected officials, at the local, state and national levels, make it clear that parents should have no say as to what their children are being taught.

Whoever believes children belong to them, also believes that they should determine what ideologies are taught to the children.

It is becoming clear that the government believes that children belong to the state not to parents. This is important because whoever believes children belong to them, also believe that they, alone, should determine what children are taught. This isn’t something new. History shows that when the government takes responsibility for the education of the children, dire consequences are always the result.  Consider these statements and think about what they led to in various countries around the world.

The education of all children, from the moment that they can get along without a mother’s care, shall be in state institutions. Karl Marx

Give me four years to teach the children and the seed I have sown will never be uprooted. Vladimir Lenin

Dr. Erwin Lutzer wrote a book several years ago titled, When a Nation Forgets God. In his book, Lutzer explained how Hitler viewed Germany’s youth as belonging to the Reich. Parents were responsible for feeding the child’s body but the state would feed the child’s soul — what the child would believe.

We must destroy the myth of neutrality when it comes to the education of our children!

Dr. John MacArthur wrote the following warning to parents when it comes to raising (educating) children.

God Himself has given the responsibility for raising children to parents — not to schoolteachers, peers, childcare workers, or other people outside the family — and therefore it is wrong for parents to…shift the blame when things go wrong…Parents must involve themselves in their children’s lives enough to insure that no other influence takes precedence.

We are living in challenging times. This is not the time for parents, church leaders and Christian educators to remain silent to the subtle indoctrination that is taking place in schools all across the country. It is not enough to merely speak out against such indoctrination. It is time to take action and take control of our children’s and grandchildren’s education.

We must destroy the myth of neutrality when it comes to the education of our children!