Getting Rid Of Bad Fruit Isn’t The Answer 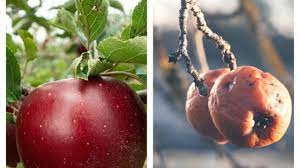 Last year, the country experienced something that hadn’t taken place for quite some time. Parents became very involved in challenging what their children were being taught in school. Much of this outcry can be traced back to schools going virtual due to the Covid-19 pandemic. With students being taught virtually on their computers, parents started realizing some of the dangerous ideologies that were being pumped into their children’s minds.

Videos started showing up on social media that documented parents challenging public school administrators and board members and demanding that schools not teach these ideologies. Much of the attention was focused on what is referred to as Critical Race Theory or CRT.

This parent uprising became a political hot potato in the 2021 election cycle. Probably the most notable place this was seen was in Virginia’s gubernatorial race. It seemed like the entire nation became focused on the race between Terry McAuliffe and Glen Youngkin. In a September 29th debate, McAuliffe made a statement that some might compare to the “shot that was heard round the world” at the beginning of the American Revolution. His statement became headlines all across the country. He said,

I don’t think parents should be telling schools what they should teach.

Many people believe this is what turned the election into a major victory for the opposing party. When Youngkin won, he followed through with his promise to remove teaching of the CRT ideology in Virginia schools. This victory was seen by many as a victory for the family and a return to the belief that children belong to parents, not the state.

At the time this was happening, I wrote a blog in which I warned that, even if CRT was completely removed from public school curriculum, parents could not think that the war had been won. Since then one does not hear as much about CRT. I began to wonder if true change was taking place in secular education.

Once the tree of education becomes secularized, it becomes a bad tree and cannot produce good fruit.

However, I am even more convinced that once the tree of education (especially schooling) becomes secularized, it becomes a bad tree. We know that Scripture teaches that a bad tree cannot produce good fruit. There is no doubt about it that public education in the United States has become completely secular in its philosophy of education. Unfortunately, this is also true in many, if not most, private schools and can also be seen creeping into Christian schools and home schools.

The philosophy of education will always produce fruit based on its beliefs and values. A secular philosophy of education can only produce bad fruit because the philosophy is bad. I have been intrigued by some “new” terminology that is being used in more and more schools. Instead of talking about Critical Race Theory, I am hearing a lot of talk about training in DEI. DEI stands for Diversity, Equity, and Inclusion.

There is a second trend that I have witnessed in what is being taught in many schools today. It is referred to as SEL or Social Emotional Learning. One description of SEL states that it is a methodology that helps students of all ages to better comprehend their emotions, to feel those emotions fully, and demonstrate empathy for others.

Once a school or school system becomes secular, you cannot reform it by simply removing certain dangerous programs.

I am not trying to provide a critique of CRT, DEI or SEL in this blog. What I am trying to do is call everyone’s attention to the fact that these emphases/programs have one thing in common. They have been developed out of a secular worldview and philosophy of education. As such, God and biblical truth have no bearing on their beliefs and/or values.

Once a school or school system becomes secular, you cannot reform it by simply removing certain dangerous programs/ideologies. Any educational effort based on a secular philosophy of education has become a bad tree and will only produce bad fruit.

Even though parents are right to go to their school leaders and stand up against false philosophies that show up in their schools, it will not make the school safe for their children. This is because the problem is in the worldview and philosophy at the root of the school.

If I had to state what is the major problem of a secular worldview and philosophy of education, I would put it this way. When God and His Word are removed from education, man becomes the definer of truth and meaning of life. Behind all secular efforts to educate children and youth are Satan’s two lies that he used to first tempt Adam and Eve.

The problem is in the worldview and philosophy at the root of the school.

I have had the privilege to preach at a church, conduct two parent seminars and provide staff training at a Christian school over the past two weeks. At each event, my focus was on the need for Christian parents, pastors and educators to develop a biblical worldview and embrace a biblical philosophy of education (Kingdom Education™). This is the only hope we have to raise future generations to become authentic disciples of Jesus Christ.

Behind all secular efforts to educate children are Satan’s lies that God’s Word, therefore God, cannot be trusted and you can be your own god.

The response that I received from each of these groups was overwhelming. I could not believe the hunger that parents, church leaders and teachers have for truth. Even those from two strong Christian schools that I was at told me that these events were some of the most meaningful sessions that they had ever been a part of.

Two teachers from one of the schools I was at had attended last summer’s Kingdom Education™ Summit. They left the Summit different persons. One of these teachers told me, the Summit not only changed my teaching, it changed my life. This is why I am conducting two Kingdom Education™ Summits this coming June. We must unite the home, church and school by addressing the issue of education biblically.

I am encouraging every Christian school and church to be part of this summer’s Kingdom Education™ Summits. Click HERE for more information.