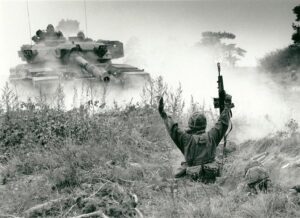 In my last blog, I shared some of the horrific things that are happening to our children and youth in schools, the media, the government and, even, in Christian churches and schools. If you haven’t done so already, please read my last article before proceeding further.

I have found myself spending more time in God’s Word and prayer each day since posting that article. My heart has been further broken with more evidence of Satan’s efforts to destroy the family, control the state and weaken the church — especially when it comes to the education of our children in the home, church and school.

It has been heart wrenching to read where we are as a society. Just a few of the items that have come across my desk over the past couple of days include:

When I take time to examine where we are as a country, I find it easy to become discouraged. This is even more true when I see how today’s Christian homes and churches have succumbed to the pressure and have become mere carbon copies of the secular society in which we all live. It is easy to be overwhelmed, think that we have fallen too far, and that there is no hope to turn things around. This is when I say to myself, BUT GOD!!!

Jehoshaphat sent teachers throughout Judah to teach all the people about God.

This same feeling of hopelessness must have been in the minds of three of Judah’s kings. King Abijah faced terrible odds when confronted by a civil war with Israel. Judah began this war with 400,000 valiant warriors. However, Israel drew up into battle formation with 800,000 chosen men who were also valiant warriors. Judah prevailed over Israel.

Then, King Asa faced an attack by the Ethiopians. Even though Asa was able to assemble an army of 580,000 men, Zerah, the Ethiopian, had a million men and 300 chariots. Even against those odds, Judah was victorious.

Jehoshaphat succeeded Asa as king. Like his predecessors, Jehoshaphat faced a huge army from Moab and Ammon. The King saw no way out of this terrible condition. Surely, Judah would not be able to survive this attack. However, not only did Judah survive, but Judah didn’t even have to fight. Why? Because God fought the battle for them.

How did Judah survive these wars when it seemed like there was no hope? What caused God to take action and bring victory to the underdog, Judah, in each of these cases? As I studied 2 Chronicles 13-20, I found some common practices of these three kings of Judah that resulted in God doing some miraculous works.

Jehoshaphat did something else that is noteworthy. He developed an educational system or process so that all of Judah was taught about God — who He was and what He expected of His people. In 2 Chronicles 17, Jehoshaphat selected officials who would teach truth to all the people.

So they taught in Judah, and had the Book of the Law of the Lord with them; they went throughout all the cities of Judah and taught the people. 2 Chronicles 17:9 (NKJV)

The results that Judah experienced were amazing.

And the fear of the Lord fell on all the kingdoms of the lands that were around Judah, so that they did not make war against Jehoshaphat. 2 Chronicles 17:10 (NKJV)

There is a marvelous truth that is key to seeing God bring us victory in the face of insurmountable odds. This truth is found in the words of Hanani, the prophet, that he spoke to Asa. It is important to see the back story that led up to Hanani’s prophetic words.

Even though Asa had seen firsthand how God had given Judah victory over the Ethiopian army, he didn’t trust God when faced with another war. Instead Asa made a treaty with the king of Aram. This alliance stopped an attack on Judah but also led to Asa’s downfall. Hanani told Asa,

For the eyes of the Lord run to and fro throughout the whole earth, to show Himself strong on behalf of those whose heart is loyal to Him. In this you have done foolishly; therefore from now on you shall have wars. 2 Chronicles 16:9 (NKJV)

The home, church and school must put away the idols of secular education and obey God’s instruction on how to educate children and youth.

The home, church and school are facing a large and powerful army. This army is made up of princes and powers of darkness and is led by Satan. The army’s objectives are to destroy the family, control the state and weaken the church. Caught in Satan’s crosshairs are our children. As I shared my last blog, the main fronts of this war are being waged in schools, the media and, even, the government.

We are vastly outnumbered and the hope of turning things around are dismal to say the least. In fact, it seems impossible to even think about winning. However, our only hope is to do what these three kings did.

I must admit, it doesn’t seem possible. However, since God is immutable, His eyes are still going to and fro throughout the whole earth. He is looking for that remnant of parents, church leaders and educators whose hearts are loyal to Him. As He looks, will you be the one He finds so He can show Himself strong on your behalf?

I need your school to join me at one of this summer’s Kingdom Education™ Summits where we will address the issue of education biblically and develop strategies to engage parents, pastors, church leaders and Christian educators in making disciples of Jesus Christ. Find out more by clicking HERE.