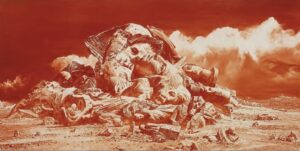 Last week I shared with you some of the lessons that God has taught me since I began teaching middle school history classes for the remainder of the year.  History is very important to God and our relationship with Him.  I shared two important lessons I learned in last week’s blog.  They were:

God is always working in history to fulfill one major purpose.  God wants the whole world to know that He is God!

History is a record of God’s works!

There was a third lesson that I learned in this past week’s history classes.

History reminds us of God’s standards!

As image bearers of God, we are to represent Him in all we do.  However, we live in a world where His standards are no longer known, much less obeyed.  When people forget God’s standards, moral decline is always the result.  Paul told the Corinthian Christians that the history lessons found in the Old Testament are there as examples for how we should live our lives.

Moreover, brethren, I do not want you to be unaware that all our fathers were under the cloud, all passed through the sea, all were baptized into Moses in the cloud and in the sea, all ate the same spiritual food, and all drank the same spiritual drink.  For they drank of that spiritual Rock that followed them, and that Rock was Christ.  But with most of them God was not well pleased, for their bodies were scattered in the wilderness.  Now these things became our examples, to the intent that we should not lust after evil things as they also lusted.  (1 Corinthians 10:1-6)

In this passage, Paul taught a history lesson to the church in Corinth.  In teaching this lesson, Paul reminded the people that the Israelites forgot one of God’s very important standards — obedience.  They had disobeyed God by not going in to take possession of the Promised Land.  The result of forgetting God’s standard was that a whole generation had to die in the wilderness; their bodies were scattered in the wilderness.

History should remind us of God’s standards!

As we study history, we should try to see if people suffered because they failed to uphold some of God’s standards.  When we do this, we can avoid some serious consequences by not living our lives in line with His standards.

A final lesson I learned about history is this.

History is a record of God’s judgment!

All history is a study of the past and how God dealt with people in relation to how the people worshiped and obeyed Him.  This truth is clearly evident throughout God’s Word.  Consider the following passage of Scripture.

History is a record of God’s judgment!

The prophet, Ezekiel, writes that God will judge people according to their ways and deeds.  If people profane His holy name by acting contrary to His precepts, God will always bring judgement on those people.  He does so for the sake of His holy name.  God will never allow His name, which represents His character, to be defiled.  When God brings judgement, He does so in order to sanctify My great name.

As I shared these four reasons why history is important to God, some of the students responded that they knew that God worked in history during the times of the Old and New Testament.  However, did He continue to work in the same way after the Bible was written and is He still doing this today?

This is when I referred back to the Six Essential Truths of a Biblical Worldview that we had covered earlier.  The first truth is that God is eternal in both His person and His nature.  I reminded the students that since God and His character are eternal, He cannot change.  If He worked in certain ways to make Himself known in the history found in the Bible, He must be doing the same today.  If not, He has changed and, therefore, He cannot be eternal.

History becomes very important when it is studied in light of these four lessons.  This is the only way to fully understand history and, therefore, accurately interpret current conditions in the world and/or one’s country.  What is even more fascinating is that God works for the same purpose and in the same ways in our personal histories.

History is a record of God’s amazing plan for mankind!

What would happen if our students not only viewed the history of the world from this perspective but also their own history and where they are today?  I believe it would transform lives like we haven’t seen in quite some time.  I pray that you and I will never see history as simply a body of facts about people, places and events.  History is a record of God’s amazing plan for mankind!